What is the Jaenisch Gambit?

The Jaenisch Gambit is one Black’s sharpest ways to meet the Ruy Lopez opening. 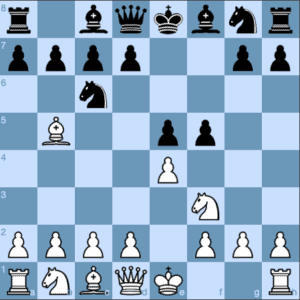 This aggressive variation is named after Carl Jaenisch (1813-1872). A strong player in his day, Jaenisch was also a respected chess theorist.

Adolf Schliemann (1817–1872) is another name usually associated with the gambit, although Jaenisch played it first. In fact the naming of this system has been inconsistent for some time. The Schliemann Defence is another version, but The Schliemann-Jaenisch Gambit is currently a popular name for this variation, in honor of both players.

There is even a discrepancy over the use of the word ‘gambit’ because White has no fun at all after accepting it with 4 exf5 and the vast majority of games will see the gambit declined.

What are the Main Ideas of the Jaenisch Gambit?

Black is aiming to avoid the generally slow play associated with the main lines of the Ruy Lopez and to create immediate tactical problems.

3 …f5 has clear similarities with both the King’s Gambit (1 e4 e5 2 f4) and the Latvian Gambit (1 e4 e5 2 Nf3 f5). Black is exposing his own king along the h5-e8 diagonal (already a sensitive area before 3 …f5) and starting trouble while behind in development. However, a player armed with special knowledge of this gambit will have very good practical chances, especially if the gambit comes as a surprise to the opponent.

One big factor in Black’s favour is that White must immediately start making big decisions. The e-pawn is proud soldier in White’s Ruy Lopez army and it is one the first player is loathe to part with. Yet to try and refute Black’s play, White may need to part with it in the first few moves.

How Should White Meet the Gambit?

4 Nc3 and 4 d3 are two most common moves and Black needs to do plenty of homework.

4 d4 and 4 Bxc6 are rarer options, although Black needs to know some specific lines to avoid falling into trouble.

Accepting the gambit with 4 exf5, giving up the centre without a fight, is far too compliant. Black can seize the initiative with 4 …e4. 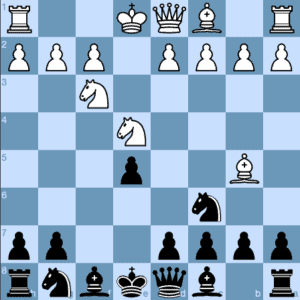 Now Black should keep away from the older line of 5 …d5 and play the sounder 5 …Nf6 instead. After the subsequent 6 Nxf6+ Qxf6 we reach this position. 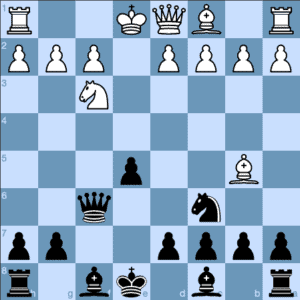 This demonstrates some of Black’s main ideas. The f-file has been opened up and White’s e-pawn has been removed, leaving Black with more centre pawns than the opponent.

Black’s queen has come pout very early on in the game and that is something which usually comes at a price: either the queen will have to lose time after being attacked, or the minor pieces will left at home for a little longer.

On the other hand, the black queen takes up an aggressive post and this ties in with Black’s game plan. After Black castles kingside, the queen will be lined up very nicely with the king’s rook. Note also that White’s queen’s knight has left the board, so attacking the queen via e4 or d5 is no longer possible.

Finally, the Black queen can be used to block a check from the white queen landing on h5, in some circumstances.

Our new course on The Thrilling Jaenisch Gambit by Grandmaster S.P. Sethuraman should be of interest to all players looking to add some bite to their repertoire after 1 e4 e5.

We will return to examine the course in greater detail in a future blog post.