Malcolm Pein returns to the Airthings Masters in today’s Daily Telegraph chess column. He finds some surprising results in the quarter-final matches, leading to the elimination of the favourites.

Just as we saw yesterday, Daniil Dubov is a danger to everyone, including the World Champion.

The three favourites were all eliminated in the quarter-finals of the Airthings Masters on Chess24.com. as Magnus Carlsen was defeated by 24-year-old Russian Daniil Dubov. The American duo of Hikaru Nakamura and Wesley So lost to Levon Aronian and Maxime Vachier-Lagrave respectively. Candidate Ian Nepomniachtchi also failed to make it to the semifinals, which lined up: Aronian-Vachier-Lagrave and Radjabov-Dubov.

Following a 2-2 draw in the first leg, Dubov won the second 2.5-0.5. Today’s puzzle is the conclusion of the first game. It’s Dubov, white to play. 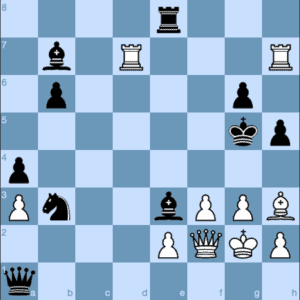 How did he continue?

Game three was a great fight, with Dubov showing the aggression and originality which makes him such a difficult opponent. 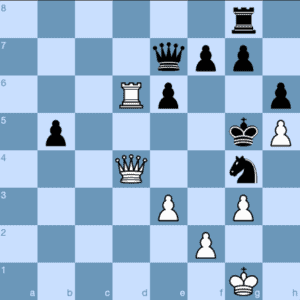 The inaugural Chessable Awards certainly sparked a lot of interest and debate.

26 Chessable courses made it to the shortlist for the category of Course of the Year and the top of the leader board changed several times as we approached the voting deadline. 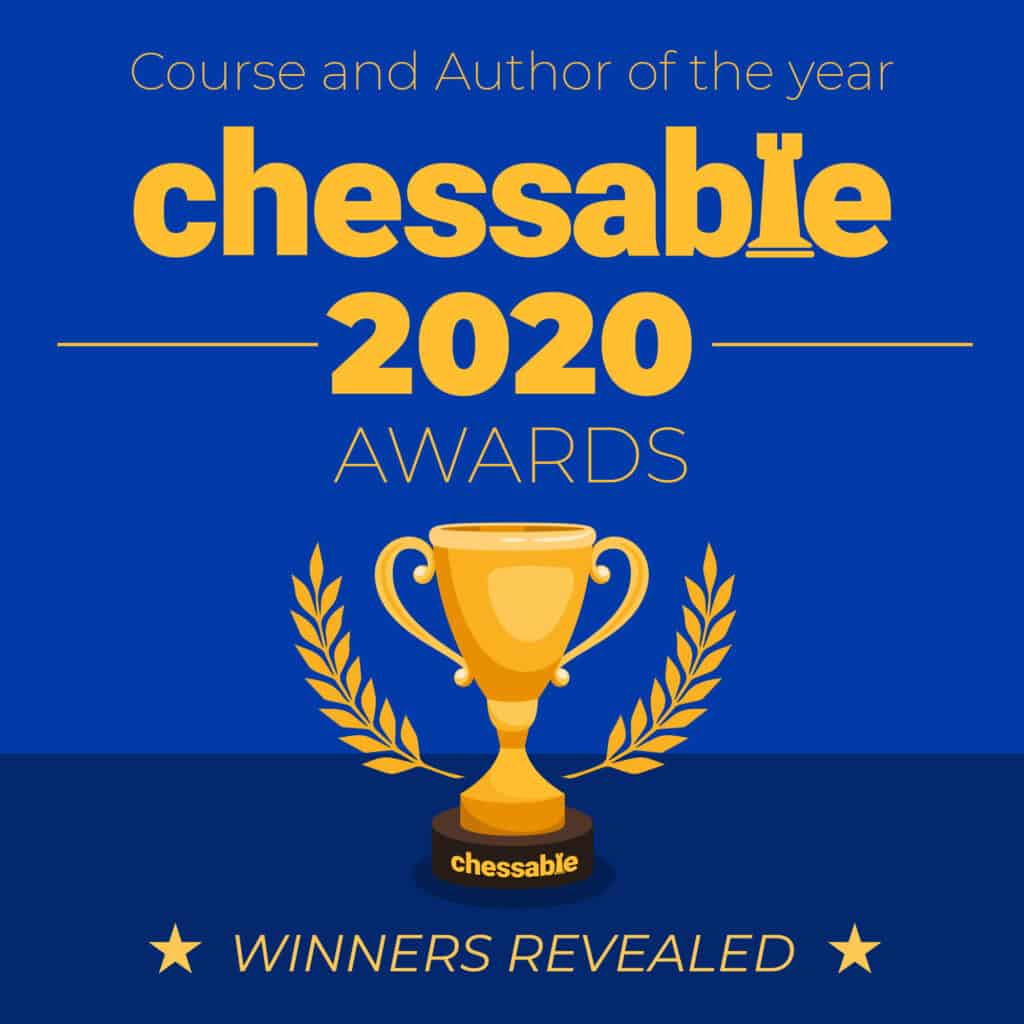 Without further ado, here are the most successful courses of 2020, as voted for by you, dear readers. Click on the pictures to find out more about each course. 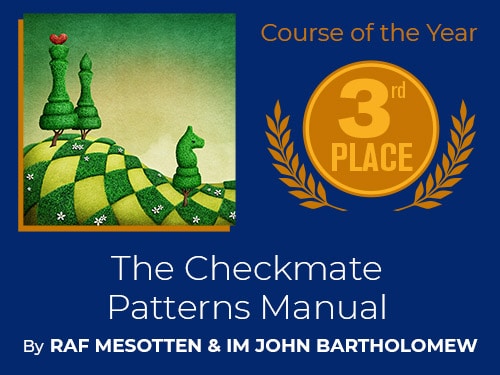 This extremely popular course fought off plenty of Grandmaster opposition to claim this highly meritorious place. 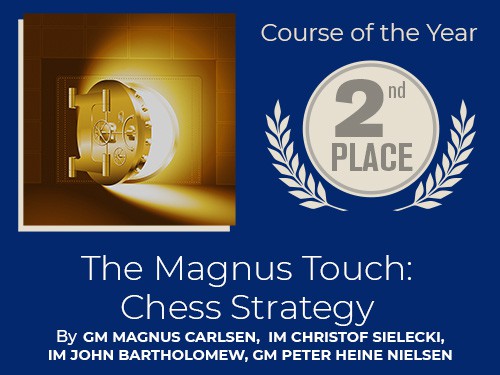 This course was always going to be a serious contender for first place. However, it fell just a little short.

Lifetime Repertories: Najdorf Sicilian by the one and only Grandmaster Anish Giri! 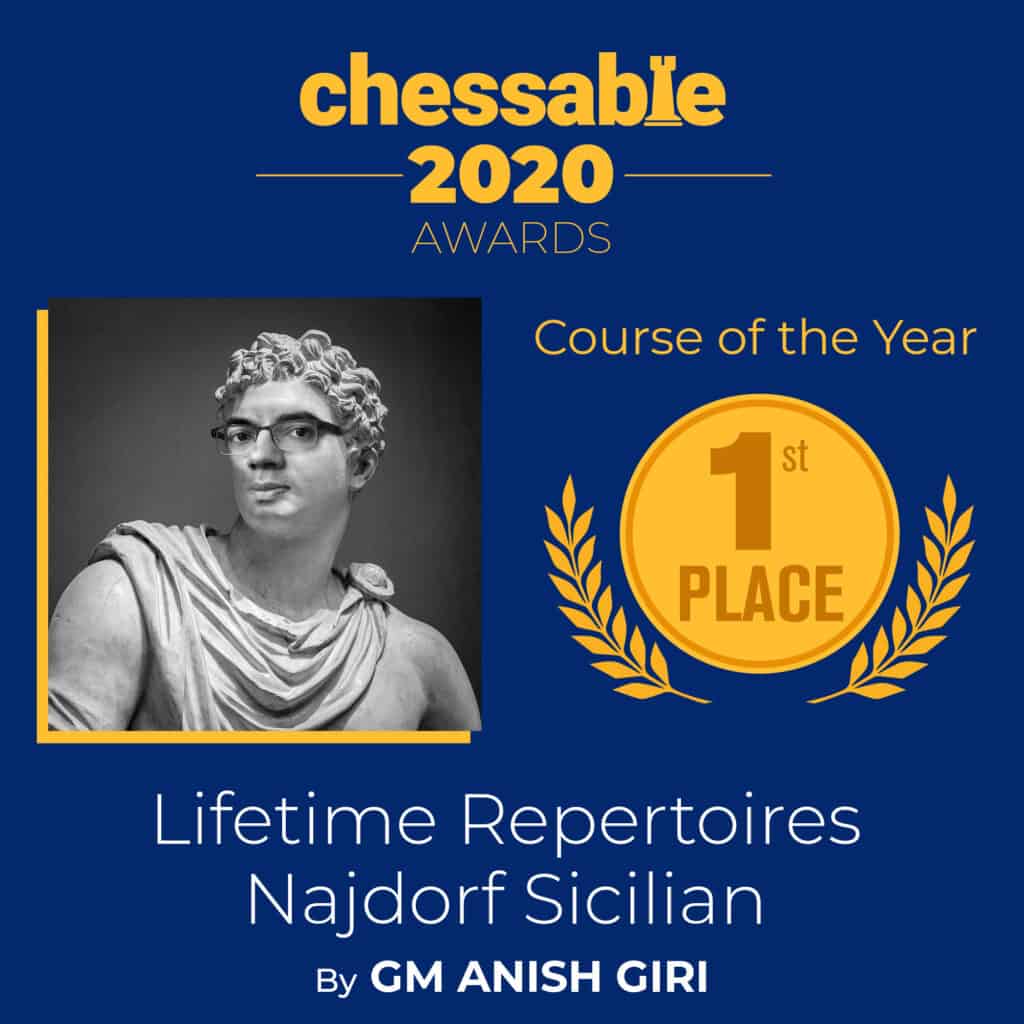 We featured this course recently and the lure of the fighting Najdorf Sicilian clearly remains as strong as ever with the voting public.

Is Grandmaster Giri’s first place in the Chessable Wards an omen for the forthcoming concluding phase of the FIDE Candidates Tournament?

The winner of the Chessable Author of the Year for 2020, as voted for by panel of Chessable experts, is…

Grandmaster Shankland’s new course was featured here yesterday and the full range of his Chessable output to date can be found here.

We have had an exceptionally fruitful year and feel very fortunate to have had the chance to work with so many talented and hardworking authors over the course of 2020.

Before we write some nice words about our choice author, we would like to thank ALL of our published authors, past and present, for contributing to making Chessable the best online resource for chess learning!

It was not easy for our publishing team to pick a Chessable Author of the Year for 2020. In the end, we agreed that one author in particular stood out – and that author is Grandmaster Sam Shankland.

Sam’s dedication, his prolific output – he published four courses in 2020 and delivered the manuscript for his fifth course before the end of 2020 – together with his consistent commitment to delivering true value to his students is not only admirable, it is also exceptional.

Sam has never missed a deadline and he often delivers his manuscripts well before our agreed deadlines. Additionally, he has always stayed open and receptive to feedback to improve his work. He continuously updates and improves his existing courses based on his students’ feedback. And, he’s always ready to answer questions.

Most importantly, Sam is an eloquent teacher who can explain complex opening or strategic concepts in a way that appeals to thousands of chess fans. He is a versatile writer with a self-deprecating sense of humor and a penchant for brutal honesty; the mark of a true chess player!

Sam is not only a great teacher and educator but he is also a genuine lover of the game. For this we salute him and celebrate his work. Congratulations from all of us at Chessable!

It has been a great success this year. We are already looking to expand the number of categories for the Chessable Awards of 2021. Thank you, everyone!

Daniil Dubov is featured in this column with increasing regularity. Indeed, we saw a game of his yesterday. Nobody is complaining though, as the young star’s games are always entertaining and in today’s encounter he gives a fine demonstration of the power of the Tarrasch Defense.

Daniil Dubov again proved he can match Magnus Carlsen at Rapid Chess as he came from behind to secure a 2-2 draw in the first leg of their quarter-final tie at the Airthings Masters on Chess24.com. Carlsen won the first of the four games with some virtuoso endgame play, before Dubov missed winning chances in game two after Carlsen mistakenly turned down a repetition of moves. 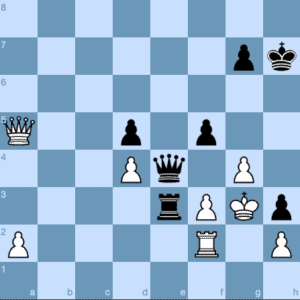 Today’s puzzle is from the So– Vachier-Lagrave quarter-final first leg which MVL won 3-1. 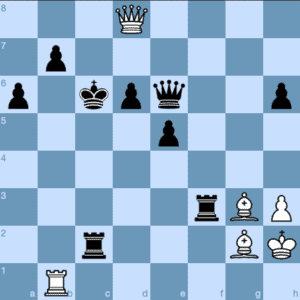 How did Black simplify to a won endgame? 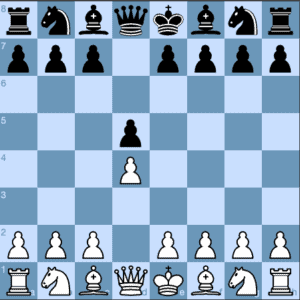 Black wants an equal share of the centre at the very start of the game and has various options thereafter.

In a world where the London System seems to be taking over as the main weapon for White, it is good to see the main lines of the Queen’s Gambit receiving the star treatment of a Lifetime Repertoire course.

White needs to be ready for the following:

Orthodox Defense (2 …e6, with Black unwilling to surrender any territory)

Queen’s Gambit Accepted (2 …dxc4, giving up the centre to gain active play for the pieces)

Semi-Slav Defense (2 …e6 with …c6 to follow) and a number of other popular defenses.

The defenses after 1 d4 d5 2 c4 have stood the test of time and they need to be taken very seriously.

‘Much like we saw in the first two parts, my goal is to fight for a strategic edge such as space advantage, a better structure, or the bishop pair, and this is not really a repertoire aimed at tearing Black’s head off.

But, given that Black has placed a pawn in the center on the very first move of the game, I find it harder to accomplish these goals, and I was actually surprised to find that even in some very solid variations, White ended up with some kind of attacking chances.’

Playing Against the Slav Defense

With that in mind, I decided to look at the recommendations against the Slav Defense, which starts with 1 d4 d5 2 c4 c6. 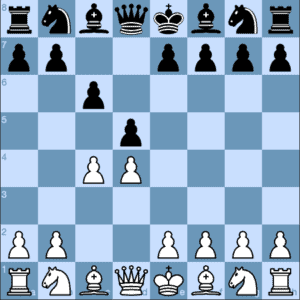 This is a very tough nut to crack, as any 1 d4 d5 2 c4 adherent will confirm. Vasily Smyslov, the Seventh World Champion, used the Slav throughout his lengthy career and he very rarely lost with his favourite defense.

The Exchange Variation with 3 cxd5 cxd5 is currently popular, but not everyone is confident about playing for a win from a symmetrical position. 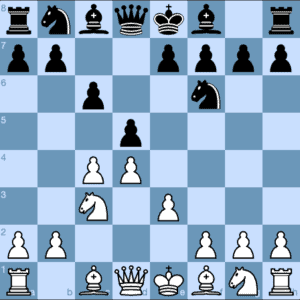 One important aspect of this line is that if Black plays 4 …e6 then the game transposes to a Semi-Slav Defense. This dovetails very comfortably with the course’s recommendation against the Semi-Slav, which is also based on an early e2-e3. This rules out the intense and theoretically heavy lines with 5 Bg5, but they are not to everyone’s taste anyway.

If Black wants to keep the game firmly in pure Slav territory, then the options include 4 …g6, 4 …a6 and 4 …Bf5. The last of these is almost certainly going to be the most popular with club and tournament players. 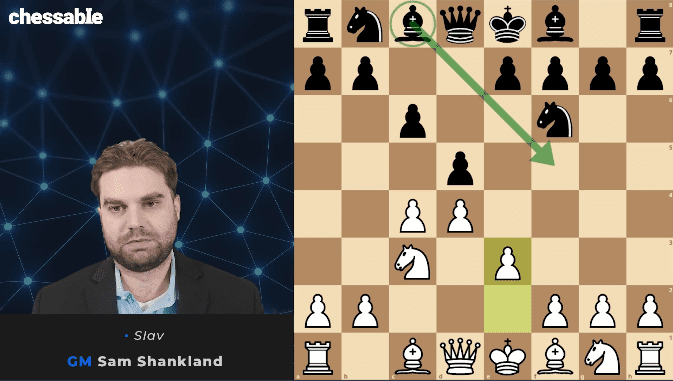 This is because they understand the difference between the Slav and the Orthodox Queen’s Gambit Declined; by playing 2 …c6 instead of 2 …e6, Black’s queen’s bishop can be developed very quickly. Why not as early as move four? Can White do anything about it?

It is important that White developed the queen’s knight first, because it applies pressure on d5. This makes 4 …Bf5 a riskier choice than if White had played 3 Nf3.

Grandmaster Shankland shows that Back has to sacrifice a pawn after the simple moves 5 cxd5 cxd5 6 Qb3. 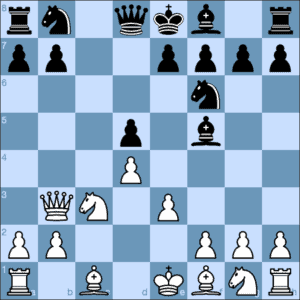 The queen threatens the b7-pawn and applies more pressure to d5. Black can play 6 …Bc8 to protect the pawn, but that rather goes against Black’s desire to develop the bishop quickly. 6 …Qb6 would be the normal way to meet Qb3 in such positions, but here White simply wins a pawn with 7 Nxd5.

This explains why Black has to seek chances with a pawn sacrifice, by playing 6 …Nc6. 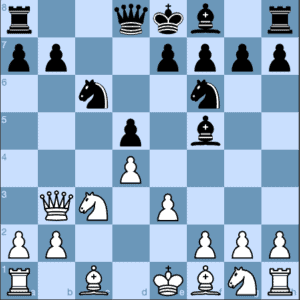 White has to accept the challenge with 7 Qxb7, otherwise Black just enjoys quick and easy development at no cost. Black now gains tempi on the queen with 7 …Bd7 8 Qb3 Rb8 9 Qd1. 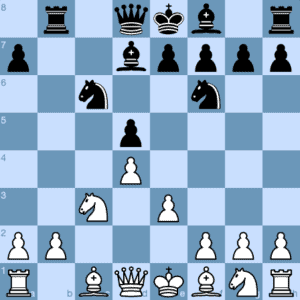 ‘White got his queen back home and will remain a healthy pawn up if he can complete his development. Black should be very direct.’

Black’s best move is indeed direct. 9 …e5 A standard idea; open up the game while ahead in development. The course goes on to show a line in which White returns the pawn for other gains, leading Grandmaster Shankland to comment: ‘The machines are claiming White is much better, and I won’t argue with them.’

I think this brief examination of the recommended line against the Slav Defense is indicative of what one can expect to see in the course. The recommendations are challenging for Black, despite not necessarily following the absolute main lines. At club level, they will pack a mighty punch.

Click the link to find out more about the course: 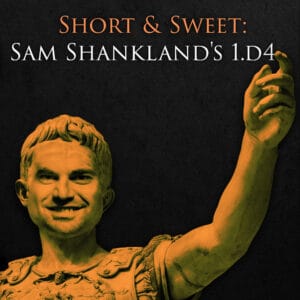 There is also a Short and Sweet version of the course, which is free and can be found here.

How does any player set about taming Daniil Dubov? It is plain for everyone to see how bold and explosive his play can be.

Malcolm Pein’s Daily Telegraph chess column examines a game in which a more experienced player manages to ride the waves of the tactics before finding a way through the complications to obtain a winning advantage.

The three favourites, Magnus Carlsen, Hikaru Nakamura and Wesley So, all qualified comfortably for the knockout stage of the Airthings Masters on Chess24.com. The target score to ensure certain qualification for the quarter-finals was 6.5/11 or +2, and the leading trio scored just that, with Ian Nepomniachtchi and Teimour Radjabov making half a point less.

Levon Aronian, with his dog Ponchik by his side, got through with a 50 per cent score. Maxime Vachier-Lagrave and Daniil Dubov only scored 5/11, but edged out Pentala Harikrishna and Alexander Grischuk on tie-break. David Anton and Anish Giri also failed to make the cut.

The preliminaries were not terribly interesting, with 54 draws and 12 wins for White; Black did not get a look-in. As Dubov finished eighth and Carlsen first, they play in the quarter-finals, a dream pairing for the spectators.

Another great opening idea from Dubov. Black secures two pawns for the sacrificed knight, while the white king is unsafe. Dubov is doing well before he gets too creative. 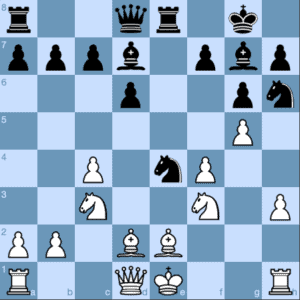 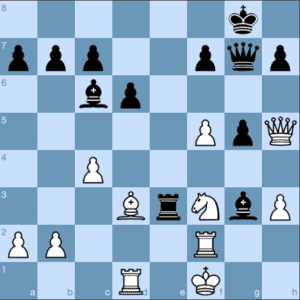 How did Nepomniachtchi force transition to a winning endgame?

Highlight the space below this line to reveal the answer to today’s puzzle. 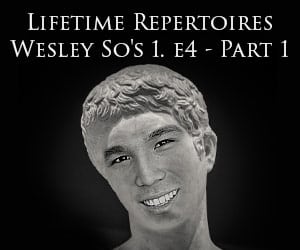