Yasser Seirawan’s Winning Chess Tactics is the latest Chessable course, following on from our release of Winning Chess Strategies.

This is a continuation of our new series of courses based on the famous books in Yasser’s Winning Chess series, originally published by Everyman Chess. International Master Jeremy Silman is the co-author of the book. 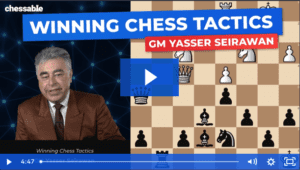 Naturally, the Chessable version is augmented by MoveTrainer™ which will help readers to absorb the material more efficiently.

Subjects covered include double attacks, pins, skewers, forks, deflections, decoys, windmills and plenty of other tactics to keep everyone amused and entertained.

There are also special sections on famous tacticians from Adolf Anderssen through to Garry Kasparov.

It is very good to see two of the players the authors have included are Rudolph Spielmann and Frank Marshall. Neither became World Champion (although Marshall did play a title match with Emanuel Lasker, but unfortunately he lost heavily) but both were noted tacticians capable of beating the best players in the world in tournament games.

We rarely see the games of Spielmann and Marshall in modern chess literature. This is partly because chess preparation has taken a different path. Picking up a chess book for relaxation and entertainment is by no means as common as doing so to prepare for specific games.

‘The Last Knight of the King’s Gambit’

Rudolph Spielmann, ‘The Last Knight of the King’s Gambit,’ achieved the rare double-feat of not only beating José Raúl Capablanca twice but in holding the great champion to a lifetime equal score.

Spielmann continued to play the King’s Gambit even though it had long fallen out of fashion. Yasser presents a game showing him on the business side of a related opening, the Vienna Gambit. 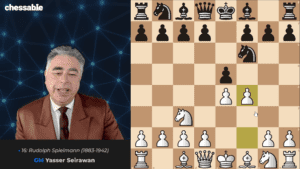 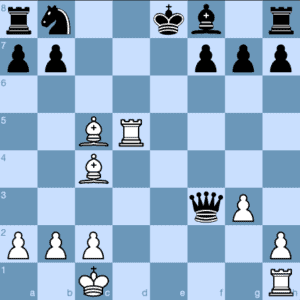 Spielmann has given up his queen, but can you see how intended to finish off his opponent from this position?

The name of Frank Marshall lives on due to the Marshall Attack against the Ruy Lopez. However, I recommend taking a very good look at his games because they are full of brilliant attacks and fine tactics. His best attacking games are reminiscent of the 19th Century’s best efforts.

As Yasser explains: ‘Marshall was a throwback to a previous chess era, and he quickly became known as a very tricky player who often swindled his way to victory.’

A swindle in chess occurs when a resourceful player turns a probable draw or defeat into a better result. Swindles don’t occur by accident; a player needs to be aware of the possibilities on offer and also be able to seize the moment.

There is nothing wrong with being a chess swindler. Marshall himself wrote a book of his best games and called it Marshall’s Chess “Swindles” and David Smerdon’s book on the subject of swindles won the English Chess Federation’s Book of the Year award this year.

Of course, most of Marshall’s wins did not rely on swindles at all, as Yasser demonstrates in the course. 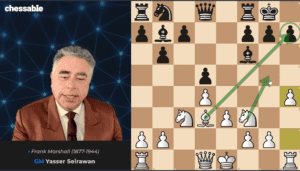 With Marshall’s games, you can be sure the arrows are all pointing towards the opponent’s king, as in this one against Amos Burn. 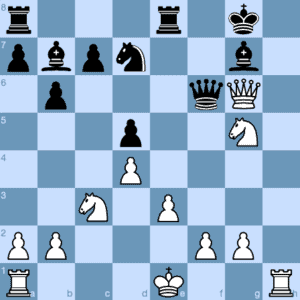 Can you see how Marshall forced a checkmate on the black king?

Here is another excellent tactical finish from Marshall. 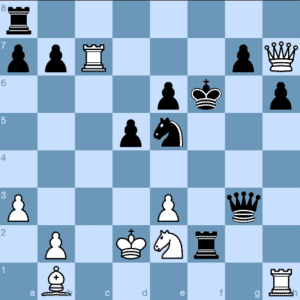 Marshall – Rubinstein
Lodz 1908
How did Marshall bring the game to a swift conclusion?
If you need the answers to any of the questions given above, then you need to head for the course.

We will continue our Yasser theme tomorrow with a new episode of Secrets From the Vault.

With most chess action moved online, Wesley So is currently the chess player in the best sporting shape. Only the…

Studying chess openings is all well and good, but there are many other aspects of chess which deserve your attention.…

We have major news for you today. National Master Ben Johnson is launching, together with Chessable, the new ‘How To…