Last night brought the semi-finals of the Four Nations Chess League (‘4NCL’). Chessable White Rose 1 played against the mighty Wood Green, with a place in the big final at stake.

Chessable White Rose 1 had a slightly higher average rating than their opponents (2484 against 2442) but nobody was under any illusion about how tough this match would be.

Our team took the lead thanks to a smart endgame tactic by Christof Sielecki. 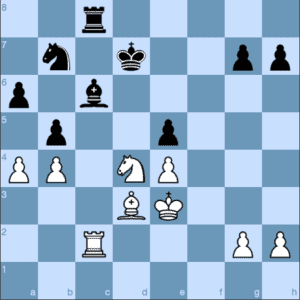 White’s knight is under attack. Does it need to retreat? 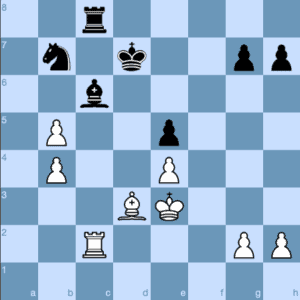 White will now win back the piece as the bishop has no sanctuary. This leaves Christof with a material advantage and a bishop against a knight. There were still some adventures ahead, but Christof eventually secured the win; 1-0 (52).

Unfortunately, the next game to finish saw Wood Green equalise the score, when Marcus Harvey pounced on an error by Alexander Raetsky.

All eyes were now on the top two boards.

Gawain Jones appeared to be under a little pressure against Daniel Fernandez and had to defend well to hold a rook and pawn ending a pawn down.

And then there was one…

James Adair, who has been on excellent form all season, needed to beat Ravi Hari to secure a match victory for Chessable White Rose 1. James had an edge but it was not at all obvious how he was going to create winning chances.

The presence of the major pieces made it very difficult to push in the position without bringing swift retribution and the game ended in a perpetual check.

The result is a fair reflection of the fine battle. However, the 4NCL tiebreak went against Chessable White Rose 1. This means our team will, very unfortunately, not be appearing in this year’s big final.

A discussion on the merits of the various tiebreakers used in the world of chess is a topic for another time. Today we offer congratulations to Wood Green and commiserations to our own team, who came agonisingly close to winning the semi-final match.

The games of the semi-finals of the 4NCL are accessible here.