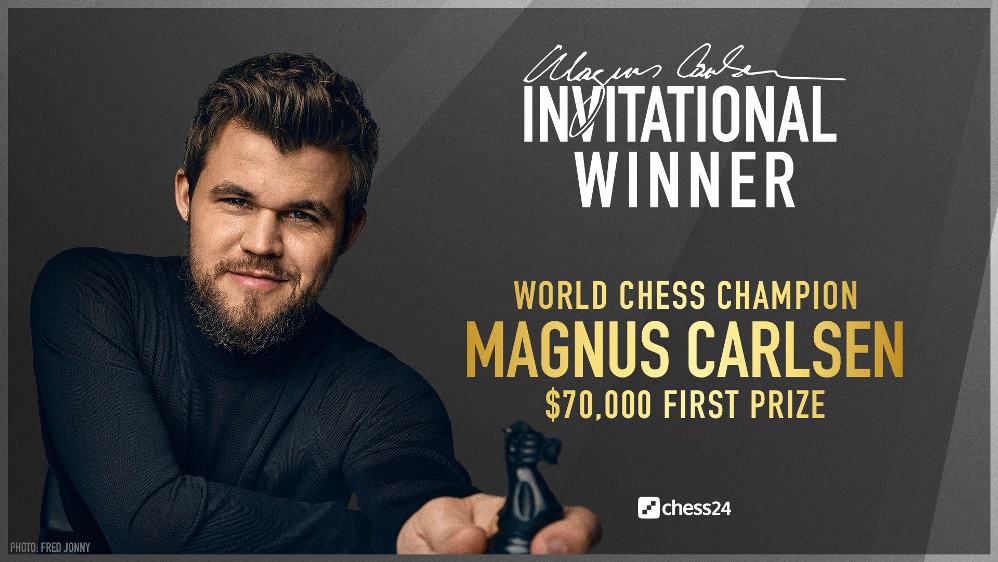 The Magnus Carlsen Invitational has now concluded and Magnus Carlsen is the champion, despite an abundance of pressure and anxious moments. He needed to show his powers of determination, persistence and resilience to finally overcome his rivals.

It is time to round off our coverage with some thoughts on the final stages.

Both semi-finals were tense and exciting affairs.

Hikaru Nakamura and Fabiano Caruana played first and they started with two hard-fought draws. Nakamura then took the lead with a strong performance – as Black – in the third game, with his bishop pair dominating the position in the late-middlegame.

Caruana – the 2018 challenger for the world title – is made of stern stuff and his handling of the King’s Indian in the must-win situation he found himself in for game four gave a refreshingly care-free impression.

It was one of the best games of the tournament, with a classic King’s Indian attack on the kingside being in serious danger of being pushed out of contention by Nakamura’s bold queenside play.

The game brought back many memories of the glory days of the King’s Indian, with Tal, Fischer and Kasparov carrying out similar kingside storms as Black and players such as Botvinnik, Karpov and Korchnoi upholding the honour of the White side. 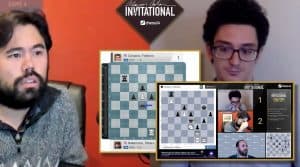 At the height of the action, Caruana sacrificed his last minor piece but in the final position he had no fewer than five pawns in return. This was more than enough to force the match into a two-game Blitz tiebreaker.

Nakamura is the highest-ranked Blitz player in the world and it is often said that Caruana is not at his best when the clock times are severely reduced. Such an observation is always going to be a simplification but in this particular case it went to form with a 2-0 victory for Nakamura. Noticeably, he kept away from a full-bloodied King’s Indian battle in the second Blitz game, opting for much quieter and more positional system instead.

The second semi-final saw Magnus Carlsen and Liren Ding carry on from where they left off in their last match of the final phase. All eyes were on the World Champion. How would he respond to the 1-3 defeat in the previous match? Would he still experiment in the openings or would it be back to more respectable variations?

The first game gave partial answers to the questions. Carlsen played the fireproof London System and appeared to be getting the upper hand until Ding set up an impregnable fortress in a bishop and pawn ending.

The second game was tight until Carlsen played a very weak and unnecessary king move. Ding pounced with a fairly standard exchange sacrifice which produced a shocking mating attack from a formerly clear sky. 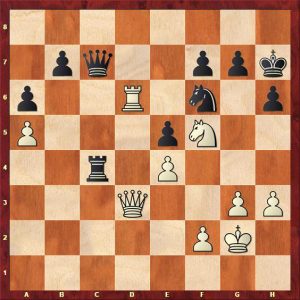 Carlsen has just played 31…Kh7?? It looks at first glance like a reasonable ‘tidying up’ move but it has a serious flaw.

This placed Ding in the driving seat. He had now beaten Carlsen four times out of their six games in this tournament. The World Champion, now only one point away from being eliminated, needed to find his form again – and quickly.

Time To Get Serious!

No more King’s Gambit experiments; the London System was retained, deferring the main struggle until later in the game. Under pressure, it was Ding’s turn to blunder with a slip which allowed Carlsen to set up a checkmating net with his queen and bishop. Ding simply couldn’t hold the white squares and resigned, one move from checkmate. 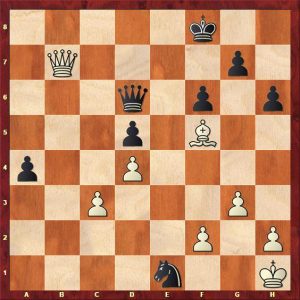 The London System turned out to be shrewd choice of opening. As it is growing in popularity, readers may like to investigate our series of courses on the system.

The fourth game brought a Semi-Slav from the champion; a very good choice under the circumstances. The players traded good moves and bad until Carlsen finally brought his rook down the seventh rank, forcing Ding’s resignation due to the impending prospect of ruinous material losses. 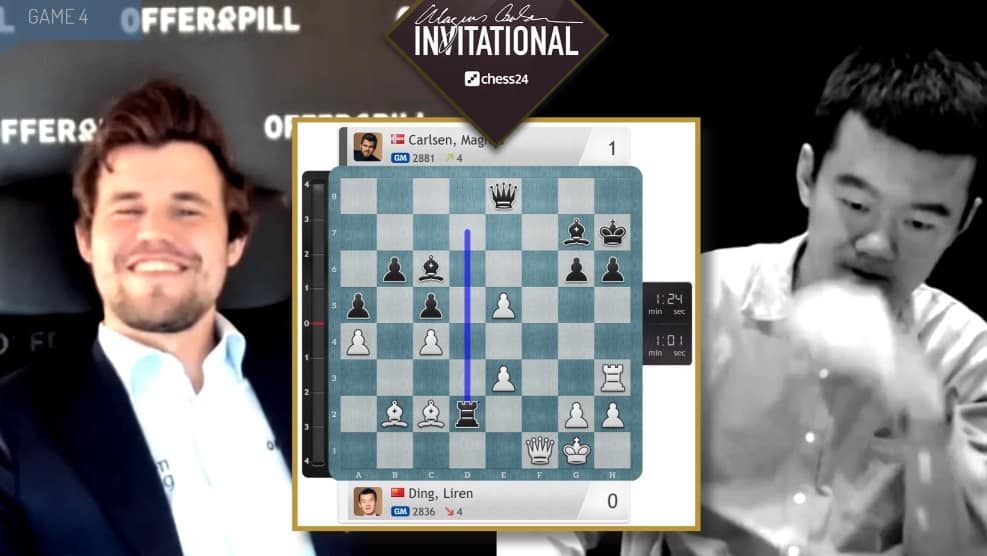 Thus Carlsen not only won this particular match – and a place in the final – but he also avenged his match defeat from just two days before. There were no experiments and even though he was not at his best he still improved as the match progressed, saving his best game until last.

It is curious but the semi-finals of sporting contests are often more exciting than the finals. However, on this occasion, the final was a very worthy one indeed. There were certainly fewer blunders awaiting us in this final and the standard of chess was possibly the highest it had been at any point in the previous rounds.

Who dared to predict a winner? Nakamura has played excellently all the way through the event, but Carlsen had played his way through a storm and was heading back into form. 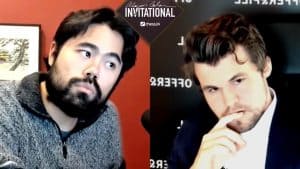 The quality of the games was very high. Carlsen opened with the English Opening (1 c4) in the first game, which is a world away from his earlier experiments. It is hard to win or lose quickly after 1 c4; the champion was clearly following his strategy form the semi-finals and delaying the major struggle until later in the game. Nakamura could never quite shake off Carlsen’s slight edge and the champion finally ground out a win on move 84.

Nakamura hit back strongly in the second game, which was a squeeze reminiscent of Anatoly Karpov’s best games. He took a pawn and space advantage into a knight ending and duly converted it to gain the full point.

The curse of playing as Black continued in game three. It was clear that Carlsen’s confidence had returned when he opted for a very unbalancing variation, straight out of the opening. 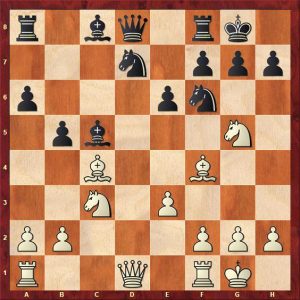 Carlsen’s launching move of 11 Ng5 was met by the critical 11 …b5, essentially calling White’s bluff. If the bishop meekly retreats and the knight follows suit then Black will be very happy indeed. Carlsen carried out his tactical plan with 12 Bxe6! fxe6 13 Nxe6 Once the smoke cleared White had traded two minor pieces for a rook and two pawns. More often than not such an early trade favours the side with the minor pieces, because they will have more unopposed activity in the middlegame, while the rooks have to wait longer to be able to influence matters.

Carlsen’s judgement was proved to be absolutely correct; he played energetically and gained an edge which then grew in size, despite the heroic efforts of Nakamura’s knights. A trading of advantages (which saw White bringing the game full circle by swapping rook for two knights) brought Carlsen a wining bishop ending – and he regained the lead in the match, with just one game left to go.

The Last Game of All

Nakamura knew he had to win the fourth game to force the Blitz play-off. Once again White gained an advantage and Nakamura ended up with an extra pawn in a rook and pawn ending. Carlsen defended actively by advancing his kingside pawns and finally held the draw.

There a couple moments late in the game when Nakamura could have spent a move on preventing – or at least delaying – Carlsen’s kingside pawn push, including this one. 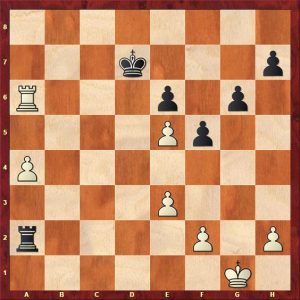 43 h4! is better than the 43 Kg2 played in the game. One point is that if Black persists with 43 …h6 44 Kg2 g5 then White has the extra option of 45 h5! which opens up a new plan of the rook rounding up the black h-pawn and gaining a new passed pawn on the kingside. At least it would have given Black something new to think about.

As played, the advance of the black pawns granted enough counterplay to prevent further progress being made.

Congratulations to both players on playing such an entertaining and instructive set of games in the final. It was fascinating to see the world’s top players pushed to the limit over the course of the tournament, knowing that their moves are being followed by a large online audience.

This ambitious new event produced a plethora of extremely interesting games, with every round high on excitement and enough blunders to keep the online audiences entertained. It all serves to remind us we are all human and that no chess player – regardless of ranking, rating or reputation – can play anything approaching perfect chess, especially with such a reduced amount of time on the clocks.

A Glimpse of the Future…?

Perhaps we have seen a glimpse of the future, in which top chess events will routinely take place online. It certainly works for Rapidplay and Blitz games. Will we one day see a World Championship contested via the Internet? The idea would have been ridiculous just a few short months ago, but with the world facing unprecedented changes it is suddenly something which cannot be ruled out.

We now conclude our trilogy of articles with a look at the final standings and prizes. 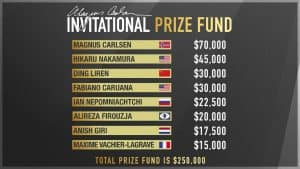