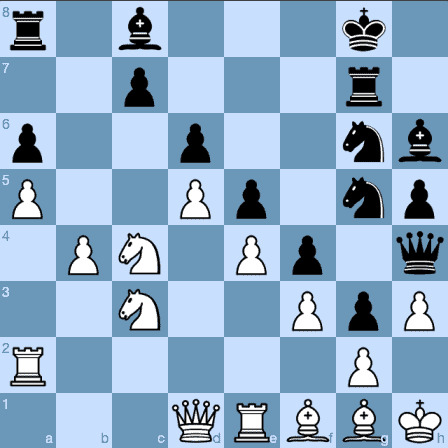 Chessable White Rose: Round Five of the 2021 4NCL

Round five of the Four Nations Chess League (‘4NCL’) brought wins for all three of our Chessable White Rose teams, with a 3-1 result in each case.

Team 1 beat Warwick University 3-1, but it was a tougher match than the score would suggest. Gawain Jones and James Adair were both held to draws on the top two boards, but Christof Sielecki and Oskar Hackner won their games to ensure our team maintained their perfect start to the season. 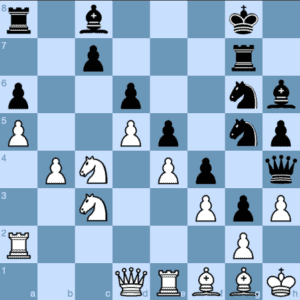 A sacrifice is inevitable in such a position.

Threatening 29…Nf2 checkmate, so White has to accept the gift.

A typical late-20s, short-lived appearance by the sleeping bishop.

Trying to keep f3 sufficiently defended, but Black opens up a second attack on the pawn. 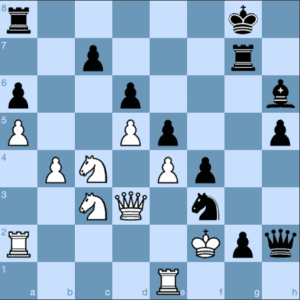 White resigned here; 0-1. After 35.Kxf3 Rg3+, losing the queen is going to be the least of White’s problems.

The 3-1 result was achieved win identical fashion for Team 2 against Alba Bon Accord 1: draws on the top two boards (for Kamil Plichta and Tim Wall) and wins on board three and four (by Peter Gayson and Graeme Oswald respectively).

Graeme’s game was a fine win with Black, featuring another sacrifice on the kingside. 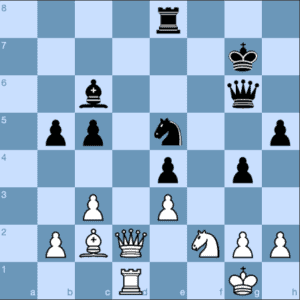 A gift that must be accepted, due to the fork on the king and the queen.

Now 37.Kh1 Qg2 checkmate and 37.Kf1 Qg2+ 38.Ke1 Qg1 checkmate are clearly unacceptable ways for White to continue. The knight must be sacrificed back.

With a large advantage to Black, who went on to checkmate the white king on move 42.

Max Parkhouse suffered a rare defeat in Team 3’s match against St. Benildus C, but this round’s theme of 3-1 victories was allowed to continue thanks to wins from David Mooney, Jonathan Arnott and Connor Clarke.

This was a very important victory, as St. Benildus C were our closest rivals after round four.

David Mooney allowed a pawn to fall in the endgame but there was a devious trap involved. 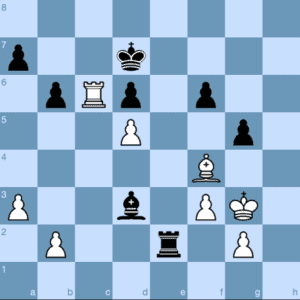 29.Bc1 was essential, to save the attacked bishop and also defend the the b-pawn.

It is still difficult to spot pieces moving backwards. If the white rook moves, the bishop falls. White moved the bishop and tried to tolerate the loss of the exchange instead, but David’s ruthless efficiency was always going to bring him the point (1-0, 41).

Team 1 maintains its place at the top of Division 1, Group B. Mushrooms 1 are still breathing down their necks, although our team has a confutable two-point margin, plus a four-point advantage in game points.

Chessable White Rose 2 remain in second place in Division 1, Group C. They are just one point behind the leaders, Barbican.

Team 3 is dominating Division 5, Group C. They have won all five of their matches and have a very healthy three-point advantage over St. Benildus C.

Our teams will be back in action on Tuesday 6 April and a report will follow here shortly afterwards.