Chessable White Rose: Round One of the 2021 4NCL

The 2021 season of the Four Nations Chess League (‘4NCL’) is now underway and Chessable White Rose have three teams in action once again.

It doesn’t seem very long at all since our teams were last in 4NCL action. Indeed, Team 1 finished the last campaign with an extremely close semi-final match in December 2020.

Time now to catch up with the fortunes of our three teams. Teams 1 and 2 are in Division 1 and Team 3 is in Division 5.

The first team started in fine style with a 3.5-0.5 victory over Mushrooms 1.

James Adair drew with Thomas Villiers and there were wins from Jose Camacho Collados, Kamil Plichta and Oskar Hackner.

True, we heavily out-rated the Mushrooms but a professional performance is always a minimum requirement when aiming for the top.

The solitary draw of the match had an interesting tactical finish. 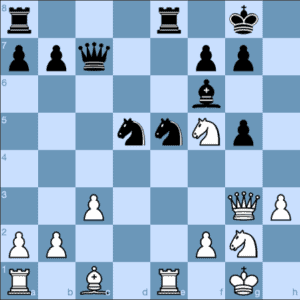 White played 25 Bxg5 and after 25 …Bxg5 it looks like White has blundered. Recapturing the bishop with 26 Qxg5 fails to the knight fork 26 …Nf3+!

White’s idea was revealed when he sacrificed a knight with 26 Nxg7. 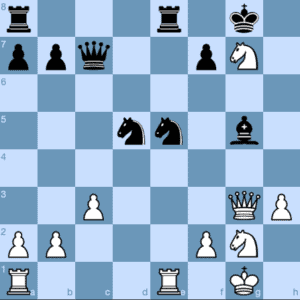 This is why White needed to deflect the bishop from f6, where it was protecting g7.

The destruction of the key defender on g7 enabled White to force a draw with a repetition of position after 26 …Kxg7 27 Qxg5+ (capturing with check prevents the knight fork on f3) 27 …Kf8 28 Qh6+ (drawn after 31 moves).

Team 2 had a fighting 2-2 draw against Brentwood A. The rating difference was very slightly in the latter’s favour.

Maaike Keetman took the glory with a fine win over International Master Richard Pert on board one. 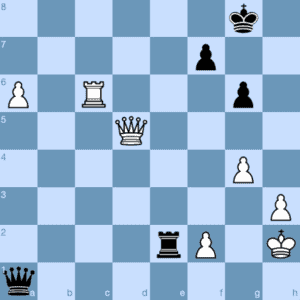 Major-piece endings are extremely difficult to play. One slip and the queens or rooks will pounce. Despite the reduction of material, checkmating attacks can strike without warning.

Richard Pert has just played 56 …Re8-e2, going for broke with an attack on the white king. It is reasonable to assume that ‘normal’ moves would allow Maaike to take her time and prepare the advance of the a-pawn, so this type of randomising move raises the tension and can induce mistakes.

However, the move does leave a leg trailing and Maaike pounced with 57 Rxg6+! which exploits the pin on the f-pawn. Apart from losing another defensive pawn, Black’s problems increase in other ways too. After 57 …Kf8 (57 …Kh7/8 58 Qh5 checkmate cannot be tolerated) 58 Qd8+ the active black rook had to return there back line anyway, to block the check with 58 …Re8.

Maaike proceeded to keep Black tied down while the a-pawn tip-toed its way to promotion, whereupon Black resigned (1-0, 64).

Wins for David Mooney and Alexandra Busuioc, together with a draw for Max Parkhouse, ensured a narrow 2.5-1.5 victory for the Team 3 against Braunstone 1. Tom Wills completed the Chessable White Rose line-up.

David Mooney is an important addition to the Chessable squad. For many years he was the strongest player on the North East England chess circuit and I saw him crush not only the other local star players but also any intrepid Grandmasters who ventured North in the deluded hope of finding easy pickings in our Open tournaments.

This position brings back memories. I played on the black side of positions such as this several times against David and seemed to be able to do nothing at all to stop him increasing his advantage. 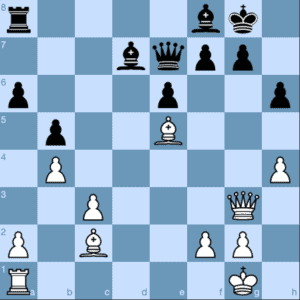 This game has several hallmarks of David Mooney.

Note the 3 vs. 2 queenside majority. It may not look very potent at the moment, but David’s skill at handling the majority is never in doubt. The pressure on the black kingside cannot be take lightly either. 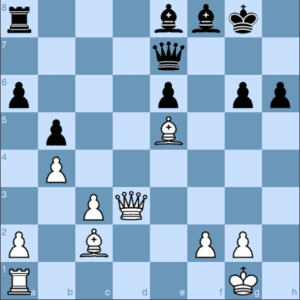 Believe me, this is absolutely not the type of position one should have against David Mooney. After 29 Rd1 Rc8 30 Bb3 he was already turning the screw. It didn’t take him long to create a passed pawn on the queenside. David Bray defended very well but a fatal mistake cost him a bishop (1-0, 51).

Team 1 tops Group B of Division on game points, while Team 2 shares fourth place in Group C with Brentwood A.

Team 3 has the same number of points as the top teams in Division 5 but are in fourth position on game points.

The second round will be played on Tuesday 9 February and we will report on all of the action shortly afterwards.