It doesn’t seem like two weeks since we reported on Round Four but the fixture schedule tells no lies.

Our first team continued their dominant form with a very convincing 3.5-0.5 victory over Wood Green Youth.

James Adair certainly likes playing against the French Defense; he gained an advantage and his technique to convert it into an endgame victory is the main feature of this report.

Alexander Raetsky also won in the endgame (with bishops and pawns) and Peter Wells had an interesting draw.

Tim Wall’s Dutch Defense, combined with his usual creativity, brought another win for Team One.

James’ technique in his rook and pawn ending is very impressive. Take a look at this position. 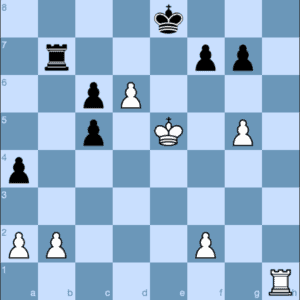 White’s big problem is that Black can always play …Re2+ followed by capturing the f2-pawn with check on the next move. Note how Black’s doubled c-pawns cleverly prevent the white king from going anywhere else apart from the f-file after …Re2+

Back to the diagram. James played the excellent move 41 g6! Now both 41 …f6+ and 41 …fxg6 allow 42 Ke6 with checkmate to follow. Meanwhile, the white pawn becomes a menace and the king suddenly enjoys more scope.

What a difference the last few moves have made! White is threatening to promote the pawn with 44 f8=Q, but Black still has some checks to try. 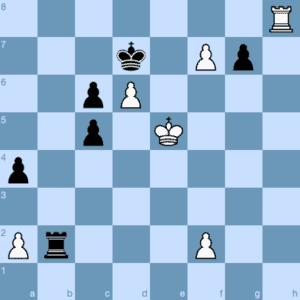 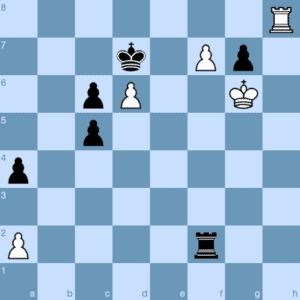 This reveals another point of 41 g6. The king can use this square now and if Black continues checking with 45 …Rg2+ then the king continues his journey with 46 Kh7 Rh2+ 47 Kg8! using Back’s g-pawn as a handy shield.

Black therefore decides to try sacrificing the rook for the promoting pawn and seeing how quickly his own pawns can run. 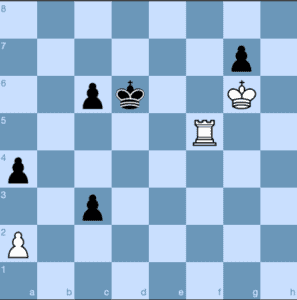 I think this is a very instructive endgame. Well played, James!

Our second team was defeated by the Guilford Young Guns, by 1.5-2.5. We were definitely outgunned on the average rating of the players (2401 for the opponents, 2102 for us) but that doesn’t tell the full story of the match.

Peter Gayson’s rook outplayed two minor pieces in the endgame to secure an excellent win with Black and Max Parkhouse held his higher-rated opponent to a draw.

The top two boards suffered defeat. Oskar Hackner defended well for a considerable amount of time but Paul Townsend lost from a very good position by what appears to have been a mouse slip. 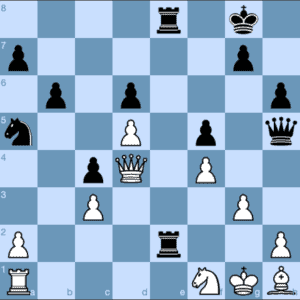 Was 26 …R8e3 the intended move? That would hope to deflect the knight from the defense of h2 (the queen is waiting to pounce with …Qxh2 checkmate) and also threaten 27 …Rd3, trapping the white queen. White could play 27 Qxe3 Rxe3 28 Nxe3 but Black is still clearly winning after 28 …Qe2.

Mouse slips are an eternal danger of online chess and another indication that we are not quite playing the same game any more.

Team Three had an excellent evening and beat Hackney Hackers by a score of 3.5-0.5.

There was some excellent tactical skill in this game. 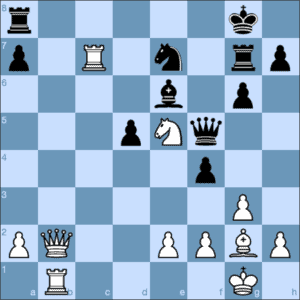 First there are some jabs to the black queen.

Now the queen is no longer on the f-file White reveals the plan. 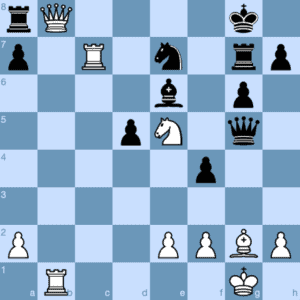 All of the 4NCL Round Five games can be accessed here.

Team 1 is now all alone at the top of Division 1. They are the only team in the group with a 100% score.

Despite losing their match, Team 2 are still in the third position of Division 1, Group A.

Team 3 is still unbeaten and is now in sole second place in Division 6, just one point behind leaders Dundee City B.

We will report on the fortunes of Round Six in two weeks’ time.