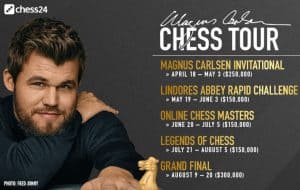 The Grand Final of the Magnus Carlsen Chess Tour starts on Sunday.

Time plays tricks in this strange world and it is hard to believe we are just about to start the fifth and final event of the Magnus Carlsen Chess Tour.

In fact my first post on this blog covered the Magnus Carlsen Invitational, which was the first tournament on the schedule. We only just posted about the Legends of Chess tournament earlier this week and now the Grand Final is almost here.

There are just four players in the Grand Final, which will increase the intensity of the competition.

Magnus Carlsen is one of the four players, of course. Joining the World Champion are Ding Liren, Daniil Dubov and Hikaru Nakamura.

Here are the pairings for the semi-finals of the Grand Final. 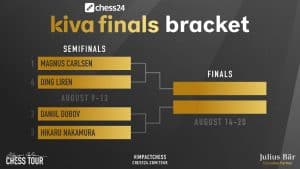 The semi-finals will feature a ‘best of five’ mini-match format and the final will be ‘best of seven.’

Carlsen is clearly the pre-tournament favourite. He is continually growing in strength and over the course of the tour has fully acclimatised himself to the very different world of online chess.

Naturally, just being the favourite is not enough to win a tournament. One has to play extremely well from the first round to the last.

Ding Liren, Daniil Dubov and Hikaru Nakamura will all be hoping to create an upset (of sorts). But do any of the trio have the tools for the job?

One things is certain. Anyone who is even slightly off form will be eaten alive in such company.

We are in for some absolutely fascinating games of chess. A veritable bonanza, which will provide plenty of entertainment all the way to 20 August.

There is only one place to be for the best live coverage, complete with guest star commentators, and that is chess24.

Who will be the winner of the Grand Final?