How good is your chess?

It is a simple enough question and you should know the answer better than anyone else. However, various factors taint the capacity to answer truthfully.

Are you an optimist?

Are you a pessimist?

Either of those traits would influence your answer. Whatever your opinion is about the standard of your game, there is always plenty of room for improvement.

How To Improve at Chess

Our new course by Grandmaster Daniel King will help you assess your true chess strength. Daniel, one of the world’s best chess writers and teachers, is firmly of the opinion that ‘studying games by top players is the best way to improve your game.’

Indeed, Daniel’s How Good is Your Chess? feature is one of the highlights of each issue of CHESS Magazine, and one which I use regularly with students of all ages. The magazine feature pre-dates Daniel and goes way back to the early years under the editorship of B.H. Wood, but the standard of the ‘predict-a-move’ quiz has never been higher than it is under Daniel’s tenure.

The selection of material is vitally important. As Daniel says: ‘The greatest leaps in my chess understanding have come through studying games by great players. Not just any games, but those with a clear strategy that were well explained. So often, my eyes were opened to a new way of thinking.’

The course has 15 games and at various key moments the student needs to predict the forthcoming moves.

There are five sections, which help to reinforce the learning points. 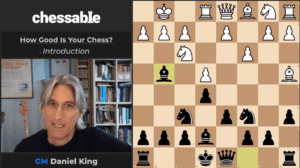 Steaming Down the Open File: An open file towards your opponent’s king allows you to bring your major pieces into the attack, and that is often decisive.

Ripping Open the King: If you can destroy the pawn cover from in front of the enemy king, your pieces will have a great shot at the attack.

The Weak Back Rank: The back rank checkmate is one of the most basic mating patterns and in both these games it can be exploited to further your goals.

Strategic Mastery: How can you improve your pawn structure? Which pieces can move to a better square? These are the most important themes here.

Test Your Calculation: Tactical motifs dominate and it is essential to calculate variations accurately in order to do well.

There are two ways to use this course. On could really enter into the spirit of it, as described by Daniel:

Alternatively, if a student didn’t want to commit to the full experience, it also possible play through the games and annotations, which are all extremely instructive.

It wouldn’t do to go into the material in too much depth here, as it would dilute the experience of the course.

Here is one position to ponder, taken from the section on Ripping Open the King. 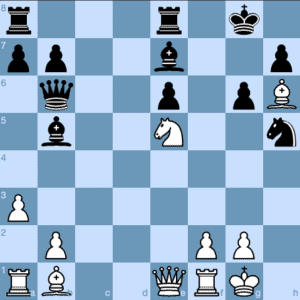 Black has just played 22 …Bb5 and Daniel asks: ‘Has it all gone wrong for White?’

Well, how good is your chess?What would you now play for White?

Click here for further details on our How Good is Your Chess? course and head here for information on Daniel’s previous courses for Chessable.