It is Checkmate Monday once more and today we have several players coming second to Nunn.

That is, of course, the famous English Grandmaster and author John Nunn. The link to Checkmate Monday is the timely release of Grandmaster Nunn’s classic book, 1001 Deadly Checkmates, as a Chessable course.

John was one of the world’s top 10 players at the height of his playing powers. Although he rarely plays now, due to being so busy with Gambit Publications, John is still a highly dangerous tactician. He also won the World Championship in Chess Problem Solving on no fewer than three occasions.

Let’s jump straight into some checkmate action from John’s own games. 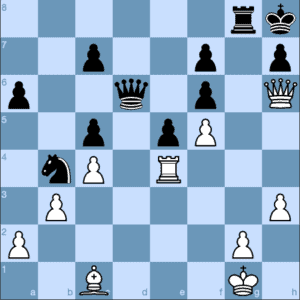 Portisch is one of the world’s most successful players. Yet even a many-times Candidate for the World Championship cannot see everything and Portisch allowed a fabulous finish in this game.

John played 33 Qxh7+!! and in the course he says ‘…and for a moment Portisch looked stunned. At first he couldn’t see the point of the Queen sacrifice; then he realized that it was a forced mate after:

…followed by 6.Bf8#. Portisch resigned (1-0) and it was a point to me. If a strong grandmaster such as Portisch can overlook a mating pattern, then anybody can.’

We all love to finish a game with a queen sacrifice. A gifted tactician such as Grandmaster Nunn has played more than his fair share, including this one. 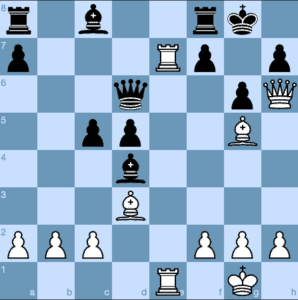 This is a forced checkmate in four moves, which sounds daunting. However, the variation is an easy one to follow after the first move.

Queen on the Attack

Of course, there are many more checkmate opportunities to be had if the queen stays on the board. In this example, Black is three pawns down but a show of dexterity by the queen makes the current material imbalance irrelevant.

The eventual threat of checkmate leaves White no better choice but to resign or give up the queen. 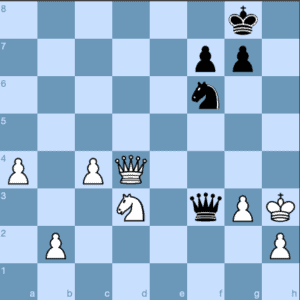 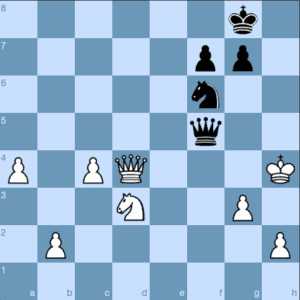 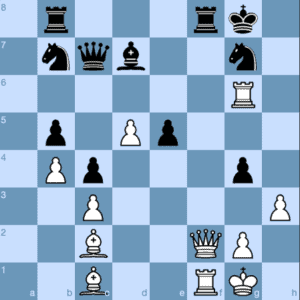 Curiously enough, both of the games between the two players in this particular event featured checkmate attacks.

The queen stars in this one, too – but another piece starts the ball rolling.

This is because of the following sequence. 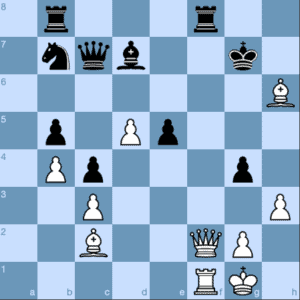 A fine shot and very easy to miss over the board.

Incidentally, we shall feature some of Grandmaster Short’s own checkmating attacks in due course, to make up for showing two of his defeats this time.

If you enjoyed those examples of players coming to second to Nunn then you may like to investigate our new Chessable course on 1001 Deadly Checkmates by the man himself. 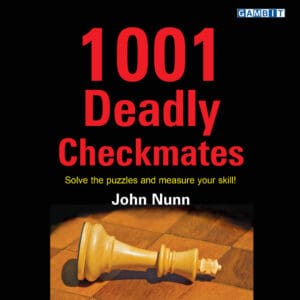 Checkmate Monday will return next week!