Chessable White Rose: Round Four of the 2021 4NCL

It was back into action for the three Chessable White Rose teams last night, in round four of the Four Nations Chess League (‘4NCL’).

All three of our teams won their matches to maintain our excellent start to the season.

Team One had a tough battle with CSC 1 before forcing a victory, to the tune of 3-1.

At this point I must confess to a remarkable record. Last season, I played for CSC 1 in some of their fixtures and lost every single game. Yet, curiously, my team finished as champions of their division. It may not be my most meritorious achievement, but what it lacks in terms of accomplishment it certainly makes up for in novelty value.

Grandmaster Gawain Jones took advantage of an early error and won comfortably and Oskar Hackner also won a fine game. James Adair and Peter Wells both drew after long endings. James had an extra bishop but it was balanced out by three extra pawns for the opponent. Peter had to hold the ending a pawn down.

Oskar coped well when under early pressure and then utilised a tactic to win a piece. 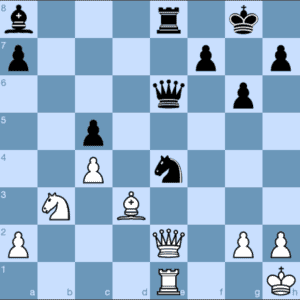 Unfortunately for White, the queens are now forced off too.

It was a hard-earned victory for Team 2, who won by the narrowest of margins against Catford Cosmonauts 1.

Christof Sielecki, Maaike Keetman and Peter Gayson all drew their games but Tim Wall’s win carried the team over the line to victory. 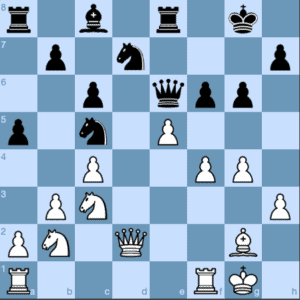 Tim won a pawn early on and a tactic helped his advantage to grow to even more considerable proportions.

Threatening a big fork on c7 and intending 21…cxd5 22.Bxd5, winning the queen with a pin.

Team 3 kept up their excellent form with a resounding 4-0 victory over BCC Foxes. Jonathan Arnott, Connor Clarke, Alexandra Busuioc and Rayelynn Posadas all took their chances well on the way to a convincing win.

Here is a checkmate in two moves to round off today’s highlights. 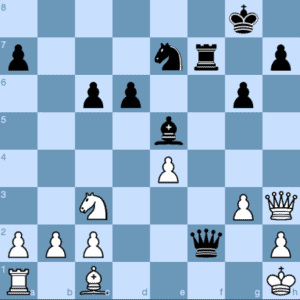 Team 1 tops Group B of Division One with four wins from four matches. They are two match points ahead of Mushrooms 1 (who they defeated in round one). This is clearly an extremely healthy position to be in but the team cannot afford to relax their efforts.

Team 2 still, still unbeaten, climbed another place in the table. They are currently second in Group C of Division One, just one point behind Barbican.

It was another excellent night for Team 3, who maintained their perfect score and still top  Division 5. They haven’t shaken off all opposition yet, though; St Benildus C are just one match post behind, having won three matches and drawn one.

Our teams will be back in action on Tuesday 23 March and a report will follow on the very next day. The season is going very well so far but all three teams need to maintain their admirable consistency. In this round, all three Chessable White Rose out-rated their opposing teams by a considerable margin and there were still some uncomfortable moments. The title races are still very much alive.