What is the Budapest Gambit?

In previous posts covering chess opening basics after 1 d4, we examined the Semi-Slav Defense and the Ragozin Defense.

Today we are looking at The Budapest Gambit, in which Black sacrifices a pawn on the second move.

The opening moves of the Budapest Defense are: 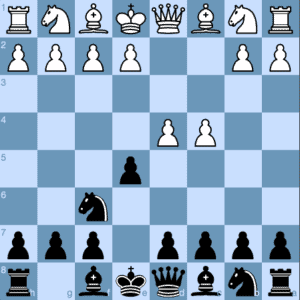 To anyone unfamiliar with the gambit it will look like Black has made a mistake and pushed the pawn one square too far. However, there is logic behind the advance of the e-pawn.

White’s best move is definitely to capture the pawn with 3 dxe5. Any other response gives Black an easy game.

3 d5 Bc5 and Black is ahead in development and already has a strong grip on the dark squares. 3 …Bb4+ is also a good move. If Black already has a choice of two strong moves as early as move three then White has clearly done something wrong.

3 Nf3 e4 and Black attacks the knight and gains space.

3 …Ne4 is the tricky Fajarowicz Variation. 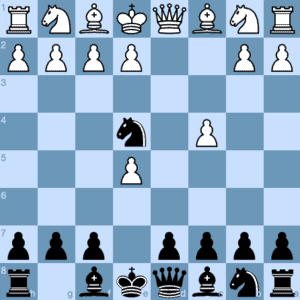 This variation has never been popular but there are numerous traps Black is hoping to spring upon the unwary. For example, 4 Nf3 d6 5 exd6 Bxd6 6 g3 Nxf2! 7 Kxf2 Bxg3+! and Black wins the white queen for two minor pieces.

The problem for Black is that if White players have prepared well for the game then 3 …Ne4 will run into 4 a3 d6 5 Qc2, which is the recommended recipe and very strong.

Therefore the Fajarowicz Variation is only playable as an occasional surprise weapon – and even then it is advisable to keep your fingers crossed. 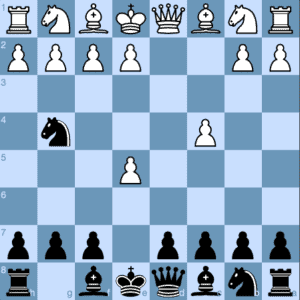 It looks like Black has not only given away a pawn but now wants to move the knight to an eccentric-looking square. Is it merely a premature attack?

No; if the knight is able to capture the pawn on e5 it will have reestablished material parity and found a very good central square.

White can try to hold onto the extra pawn with various moves, such as 4 Qd4. Black can then turn the opening into a true gambit with 4 …d6, after which the minor pieces will become very active and cause problems for the white queen.

4 f4 is the most direct attempt to hold the e-pawn but Black plays 4 …Bc5 5 e3 d6 and once again the development is worth more than the pawn, especially as White has considerably weakened his own position by moving the f-pawn.

Black players will need to spend more time studying the best ways to meet the main challenges to the Budapest Gambit. 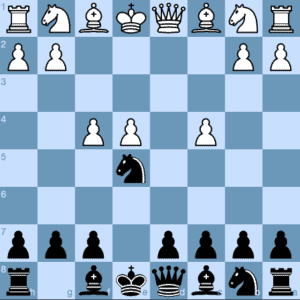 In some ways, the quieter lines, in which White seeks to calmly develop, offer the best chances for the first player to gain a slight advantage. 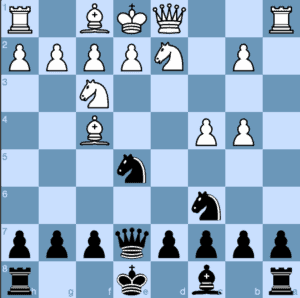 Nobody playing as White should ever fall for that trap twice and for some time Black was in need of some new ideas to avoid slipping into a slightly worse position straight out of the opening.

Therefore there is now a trend to play an early …a5 and to develop the queen’s rook via a6, from where it can even swing across to the kingside to assist with a direct attack on the white king.

Despite the traps and the obvious appeal of playing in such a fashion at club level, the Budapest Gambit has yet to achieve mainstream popularity.

This is partly because the defense lacks a hero, who is prepared to play in regularly at the higher levels. Even as a surprise weapon it can easily come unstuck against a player of great quality and experience. Nigel Short found that out when he tried 1 d4 Nf6 2 c4 e5 against Anatoly Karpov in the first game of their classic 1992 Candidates match.

Karpov typically developed an edge and won the game (although Short won the match, which is how he qualified to play his match Garry Kasparov in 1993).

Short only intended it to be a one-game opening, which is just as well under the circumstances.

Perhaps now is the time to take another look at the Budapest Gambit, for the very enthusiastic FIDE Master Kamil Plichta has just released a Chessable course.

The Fearsome Budapest Gambit offers 46,000 words and approximately 12 and a half hours of video instruction. 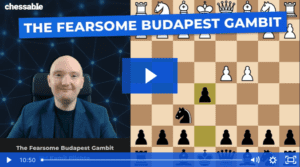 Kamil goes into great details to offer Black a full and comprehensive repertoire against 1 d4 2 c4.

Head here for further details on the course.

Perhaps you will be the new hero of the Budapest Gambit?

Looking for ways to respond to The Budapest Gambit? Check out Gambit Killer!