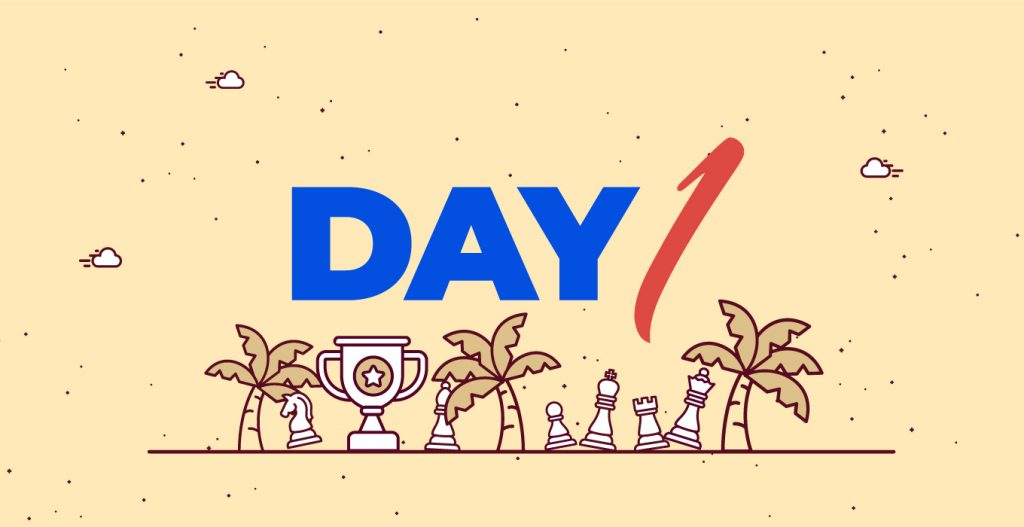 On Thursday, July 28th, the festivities kicked off for the 44th Chess Olympiad. Like the regular Olympic Games, there is an opening ceremony and the city of Chennai is doing its best to get the population in the mood for chess. It is quite a good atmosphere.

If you’d like to know more about the Olympiad and how it works, check out our introductory post to the event.

Second board for Spain Francisco Vallejo Pons gave us a sneak peak at some of the opening festivities:

Chessable CEO Geert van der Velde seems to have his pick for the best-dressed team!

The Chessable team has really been making the most of the event taking in all the sights in Chennai.

The Chennai Olympiad began with an epic opening ceremony and hundreds (thousands??) of excited fans arriving for round one.

Team Chessable spent the day manning our very busy booth, but we still found time to roam the venue and say hi to some of our many authors playing in the event.

We had visitors from all over the world and the selfie count was off the charts!

What went on in the games of the day

Beyond the festivities and decorations, the first round of the Olympiad kicked off at 11:30 a.m. local time on Friday in Chennai.

Because the tournament is a Swiss-style tournament and because there is such a disparity in levels of the different nations, there are not a lot of high-level matchups today. However, that leaves some room for some upsets.

Number 1 seed the USA defeated Angola 3.5-0.5 in the first round. First board Fabiano Caruana gave up his seat to reserve GM Sam Shankland in order to save energy for future tougher opponents.

GM Levon Aronian therefore moved up to first board, though he seemed to get into hot water from the opening. However, Angola’s first board IM David Silva accepted a draw in what may have been a won position. Getting a half point is still an impressive result for Angola.

Levon Aronian is a three-time Olympiad winner with Armenia debuted as first board on Friday with the US team.

David Silva, Aronian’s opponent from Angola, is certainly the pride of his home country right now. Aronian, ranked no. 5 in the world, was in a losing position against Silva. Aronian offered a draw and Silva gladly accepted. A draw against the world no. 5 is no small feat for a player rated 2315.

It was in this position that the Silva accepted Aronian’s draw offer:

Aronian was not the only GM to struggle on Friday. GM Johan-Sebastian Christiansen, rated 2593  of Norway failed to get the expected win against Lebanese FM Faisal Khairallah, rated 2239.

By move ten, Khairallah had a winning position, though he failed to convert and missed a few moves that would have surely sealed the deal for him. The game ended in a draw by repetition.

The position after move 10.

Stories like these are what make the Olympiad a joy to watch in the early rounds. Upsets by players rated much lower than the world’s best GMs are very inspiring for any lover of the game.

Though Angola and Lebanon must surely be proud of their respective draws obtained against some very top GM’s, the first upset win happened down at board 229 between Guyana’s 1928-rated FM Anthony Drayton and Andorra’s 2451-rated IM Jordi Fluvia.

28…Kf8 was the fatal blunder committed by the Andorran IM.

After 29.Bf6!, if Black takes the bishop, 30.Rxf7+, and Black is lost. Fluvia did his best to hold on, but only lasted six more moves.

This is the stuff chess players dream about. Defeating a player rated 500 points higher to make your country proud!

Underrated Talent in the Women’s Section

In the Women’s section, we had a thrilling game between India’s Tania Sachdev and Tajikistan’s  Rukhshona Saidova.

What was so incredible about this match is Sachdev at one point was in a losing position against Saidova. Sachdev is rated 2399, and she struggled to edge out the win against Saidova, who is rated only 1624!

It took Sachdev 103 moves to finally get the win against Saidova.

In this position, Saidova is winning. However the following move, 43.Qxb6?? returned the game to equality. From there, Saidova still played excellently over the next 40 moves until finally, Sachdev got an advantage. Even from there, it took her another 30 moves to finally get the win.

Saidova will certainly be a name to watch out for in the rest of the tournament if she keeps playing like this.