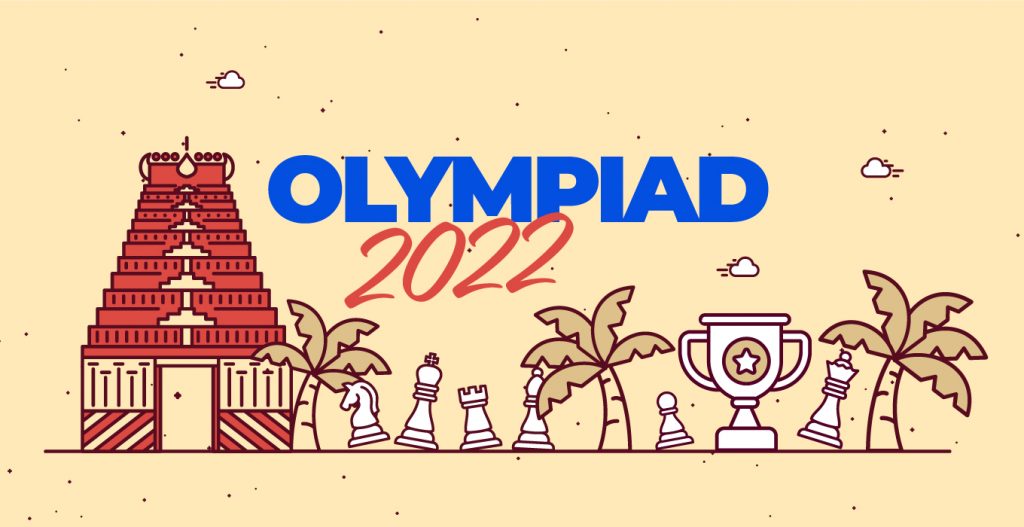 The 44th Edition of the FIDE Chess Olympiad is set to begin on Friday, July 29th in Chennai, India. The event is an 11-round tournament, with each country putting up its finest chess talent to try to take home a gold medal. This is truly a unique event in the chess tournament circuit.

We take a look at the top competitors, a history of the event, and what you can expect to see in the tournament. Plus we give a day-by-day breakdown of all the happenings of the tournament.

Check out the links to our daily coverage of the event:

What is the Chess Olympiad?

The Chess Olympiad is a biennial chess tournament in which teams representing nations compete in an Olympic-style event. The event is a classical time control Swiss tournament consisting of 11 rounds.

Like in most chess tournaments, the Olympiad employs a Swiss-style tournament. As the competition goes on, each team will be paired with a team with a similar score. As such, in the early rounds, there may be some uneven pairings, but this evens out as the event goes on.

Despite the name and format of the event, the tournament is not affiliated with the Olympic Games. The first unofficial edition of the event was held in 1924 in an attempt to include chess as an Olympic sport for the 1924 Olympic Games.

The bid was unsuccessful, and since then FIDE has operated its own Olympic-style tournament. Until World War II, the event was held irregularly on an annual basis. Since 1950, the event has been held every two years.

Due to the Covid-19 pandemic, the last two editions of the Olympiad were held in an online format. This is the first year since the pandemic that the tournament returns to an in-person format.

Who are the top teams to look out for?

This summer is shaping up to be a great one for chess tournaments. After a thrilling Candidates Tournament at the beginning of the month, we’ve now got a few star-studded teams looking to take home the gold at the Chess Olympiad.

Each country puts up a team of five players, with four boards playing and one reserve player.

The event is separated into a Women’s Section and an Open Section (in which both sexes may play).

Coming into the Chess Olympiad as the number-1 ranked team is the US. It’s hard to not like the US’s chances here with its chess dream team.

Fabiano Caruana will play first board, though he may need to put up a better performance than he did at the Candidates Tournament if the US is to bring home the gold.

Followed by Caruana are Levon Aronian, and Chessable authors Wesley So, Lenier Dominguez Perez, and Sam Shankland as a reserve.

The sheer depth of India’s team makes them favorites for many in this tournament, plus they have home-field advantage.

The number-2 ranked India has become one of the world’s premier powerhouses as far as chess talent goes over the last couple of decades, and it is showing no signs of slowing down.

Because India is the host nation, they are allowed to field several teams. This is no problem for the nation, as they have more than enough depth to do so. India will field a record six teams, with four in the Open Section and two Women’s teams. On top of it all, India’s first team will be coached by former World Champion Vishwanathan Anand, and their second team will be coached by RB Ramesh.

The second team is led at first board by the second top junior player in the world, 16 year old Dommaraju Gukesh. Also of note is rising teenage star Rameshbabu Praggnanandhaa, fourth board on India’s second team. Praggnanandhaa famously defeated Magnus Carlsen in an online rapid tournament earlier this year.

Coming in at number 3 in the rankings is Norway, led at first board by the world’s number 1 player, Magnus Carlsen.

Just this week, Carlsen announced that he would not defend his World Championship title next year, which has disappointed many chess fans.

Although he won’t defend the title, this does not mean he is leaving competitive chess. He will try to bring a medal to Norway’s team at the Chess Olympiad as first board, with Aryan Tari, Jon Ludvig Hammer, Johan-Sebastian Christiansen, and Frode Olav Olsen Urkedal following.

Coming in at number 4 in the initial rankings is Spain. Spain has a healthy amateur chess scene but lacks the household names many of the other top countries have.

Spain ranks number 10 in the FIDE rankings of top federations.

At number five in the initial rankings is Poland. Poland’s strongest player is Jan-Krzysztof Duda, who leads the team at first board.

Duda was one of eight players to play in the 2022 Candidates Tournament this summer in Madrid, in which he played for a spot in the next world championship.

However, Duda finished in 7th place in the tournament, second to last, so he will need to have a better performance in the Olympiad if he wants to lead his team to a medal.

That’s not to say Duda won’t be in good form though; to reach the Candidates, he won the last FIDE World Cup, defeating World #1 Magnus Carlsen along the way.

Rounding out the rest of the Polish team are Radoslaw Wojtaszek, Kacper Piorun, Wojciech Moranda, and Mateusz Bartel.

Other teams to watch out for

Rounding out the top ten in the initial rankings are Azerbaijan, the Netherlands, Ukraine, Germany, and England.

Some might be surprised to see powerhouses Russia and China missing from this list. Neither country is fielding a team this year, so there is a good chance for some other nations to make their mark on the competition.

What about the Women’s teams?

While the primary format of the tournament is open, meaning both men and women may compete for their national teams, there is a separate Women’s event too.

The top five teams in the Women’s competition are India, Ukraine, Georgia, Poland, and France.

Other information of interest

FIDE is trying to make this Olympiad the biggest in history. In addition, this year’s edition will award prizes to the most stylish team. So not only will there be some of the year’s best chess being played, but the players will look pretty sharp doing it.

To commemorate the event, Chessable will be holding a massive sale on its courses. Make sure to get in on the sale and get yourself in Olympic shape.

If you are a Chessable PRO member, you’ll be pleased to learn that you can get our Chess Olympiad 2022 course for free.

The course is the best way to keep up with the biggest Chess Olympiad in history. NM Bryan Tills walks you through the tournament, with video coverage of each round, an introduction to the event, with predictions, coverage of the game of the day, plus puzzles from the games and from the very first Olympiad!

In addition, we’ve added a special contest for users to make their predictions. So if you’re a Chessable Pro member, make sure to grab the course, and if you’re not, now is the perfect time to become one.