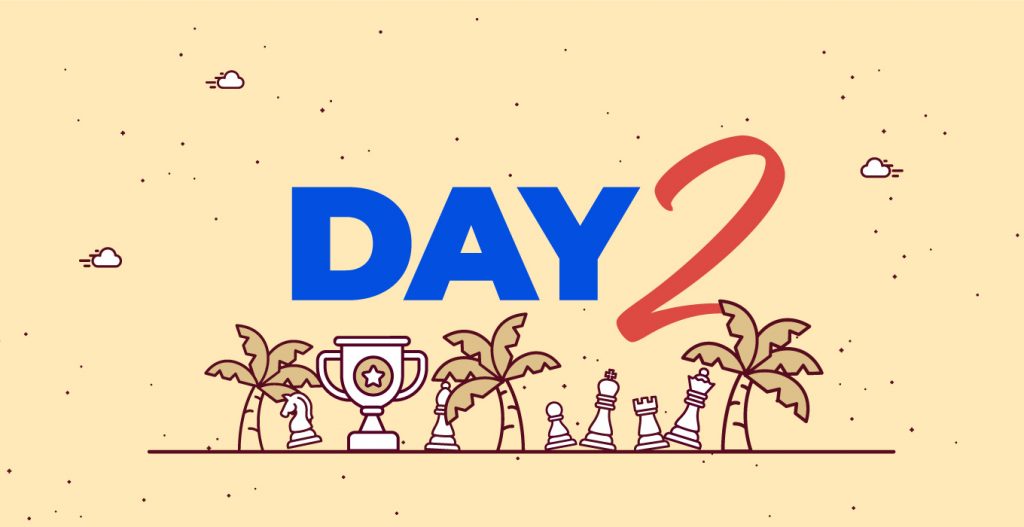 The Chess Olympiad is in full swing, with each country putting up its four best players to try to take home the gold.

There has been no bigger Olympiad in history, and the host city of Chennai has done an excellent job in making the town festive for the occasion. Plus, the Chessable team is there soaking it all in.

As it is a Swiss-style tournament, the early rounds of the event tend to see some very uneven matches. That does not mean the matches were boring on the first day, as there were some fantastic upsets.

If you haven’t seen our coverage of Day 1, be sure to do so, and if you are curious about how the event works or the history of the event, check out our introductory post on the Olympiad.

What was the Chessable team up to on Day 2?

Round 2 was the exciting day that everyone had been waiting for. The completion of our Chessable booth. And also soon-to-be-ex-world-champion Magnus Carlsen turned up.

We worked hard to prepare gift bags for the players & Able supervised… ably.

Of course, we had many more visitors to the Chessable booth and we’re always happy to take pics!

It was also a very special day, where our own MrDodgy took on all comers at blitz chess – we’re going to force him to do this every day, so come back and try your hand!

What happened with the games of the day?

Round two saw the debut of Magnus Carlsen, the world’s number one player, in the tournament.

He helped Norway to a 4-0 win over Uruguay, defeating George Meier in 80 moves.

The USA team won with a 2.5-1.5 score to Paraguay, while no India team has lost a game. In fact, India’s second team is above the first after the end of the second round.

These were the standing for the top ten teams after Round 2:

A 9-move win in the Women’s Section

One of the most incredible games occurred in the Women’s Section, between 59-year old Swedish GM Pia Cramling and Lebanese WIM Knarik Mouradian.

Cramling in an incredible feat forced Mouradian into resigning after just nine moves.

Check out the full game below.

GM Sam Shankland was only able to secure a draw against Paraguayan FM Ruben Zacarias, who is rated 545 points below him.

The game went on for only 32 moves, but neither side was able to break through for the full point, with both sides agreeing to a draw having both rooks and five pawns each on the board. It is a hard position for even the best players to convert into an advantage.

Even so, you’ve got to tip your hat to the Paraguayan FM for holding his own against one of the USA’s best players!

Carlsen grinds out the win

In probably the most anticipated game of the round, GM Magnus Carlsen faced Uruguay’s George Meier.

Meier dropped a pawn in time trouble, and Carlsen was able to do what he does best, grind out a win in the endgame after 80 moves.

However, Meier missed a potential stalemate trick at move 78, …Qc7!! which could have prepared Qg7+, though this did not happen in the end.

Not only did the entire Zambian team upset the much higher rated Danish team, but NM Nase Lungu did it in style, securing not only a win over IM Martin Haubro, which was decisive for the Zambian team, but delivering checkmate as well! Who says chess at this level is boring?

Tian had a slight advantage of -1.0 until Ftacnik blundered on move 35 with Bb3??