The three Chessable White Rose teams had a very interesting evening during round seven of the Four Nations Chess League (‘4NCL‘).

This was the last round of the group stages and there were some very tough battles at the top of the tables, with various teams trying to secure a place in the semi-finals of the tournament.

Two weeks have flown by since my last report and now it is time to catch up with the proceedings of our three teams in round seven of the 4NCL.

Team One had an extremely tough match against Celtic Tigers and Sharks. The team name certainly suggest the opponents are uncompromising and more than willing to bite and there was plenty of action in this match.

Gawain Jones was our team’s only winner. James Adair suffered a very rare defeat but Alexander Raetsky and Christof Sielecki both drew their games.

This left the teams tied at 2-2; the first time this season Team One couldn’t quite pull of a victory. 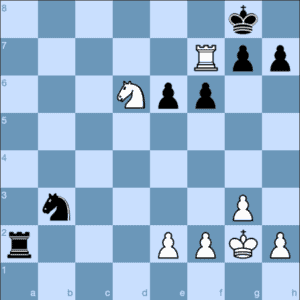 I have been watching Gawain finish off games in a highly effect manner since he was five years old. In this position, material is equal but Gawain is in full control.

Team Two continued their fine form with an impressive victory over St. Benildus A.

Tim Wall’s defeat was more than balanced up thanks to wins from Paul Townsend and Peter Gayson. Maaike Keetman drew and the team won, 2.5-1.5. 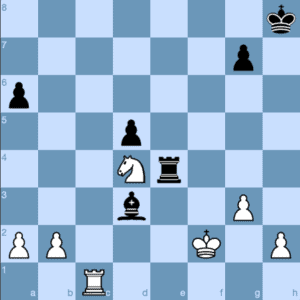 White has an extra pawn but Black has dynamic counterplay. If the knight moves away from the rook’s attack then Black will play 33 …Re2+ and harvest some white pawns.

Peter found the excellent move 33 Rd1! Black captured the hanging knight with 33 …Rxd4 but now the pin on the bishop ensures White will recover the minor piece (Ke3 is on the agenda).

It was another good evening for Team Three, who beat Ashfield Anonymous C by a score of 2.5-1.5.

Tom Wills and Max Parkhouse both won their games, Conrad Ho drew on board one and there was a first defeat for Rayelynn Posadas.

Indeed, the score should have been greater but an unfortunate blunder turned the fortunes in Rayelynn’s game.

Max pounced on a late mistake to pick up a very important win. 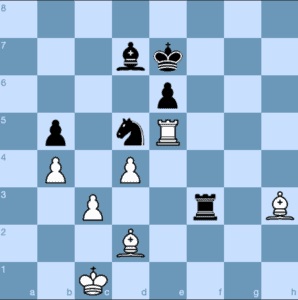 Black has defended well so far and has just played 57 …Rf2-f3, with the intention capturing the bishop on h3. It seems as if the bishop moves then 57 …Nxc3 will follow, establishing material equality.

However, after 58 Bg2! the Black pieces are suddenly in a state of poor communication. For example, 58 …Rf2 59 Bxd5 wins the knight, as the e-pawn is pinned and unable to recapture. Alternatively, 58 …Rf5 59 Rxf5 exf5 60 Bxd5 exploits the overloaded e-pawn in a different way.

Black tried the line 57 …Rxc3 58 Bxc3 Nxc3 but resigned just three moves later when more material was about to drop off.

That brings us up to date with the Chessable White Rose performances of round seven of the 4NCL.

Team One finished at the top of Division 1, Group B with a an excellent record of Played seven, Won six, draw one.

Team Two are third in Division 1, Group A having won four matches, drawn one and lost two.

Five match wins, one draw and only one defeat cemented Team Three’s position of third place in Division 6.

We shall return with a report of the 4NCL semi-finals in two weeks time.