Today we catch up with the third round of the 4NCL to see how well the Chessable White Rose teams are performing.

Last time, we examined the first two rounds, which saw all three teams staking early claims for success in their respective divisions.

Team 1 topped the Division 1, Group B table after the first two rounds. In the third round they emerged victorious against a dogged Atticus 1 team.

There were draws for Peter Wells, Alexander Raetsky and Tim Wall but the hero of the hour was James Adair, who won a very good game to secure a narrow victory for the team. 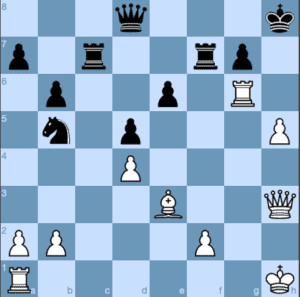 James clearly has strong intentions of a direct attack on the opponent’s king. His next move strips away the last defensive pawn.

Now just one more strike is required to bring down the house.

The dual threats of 30 Bxc7 and, even more potently, 30 Be5+ prompt Black’s resignation. 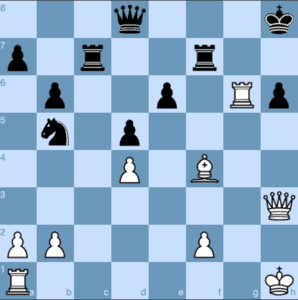 Work out for yourselves how White would conclude the game after 28 …Rxf4. 1-0

Team 2 were up against the Wood Green Monarchs. The average rating of the opponents was much higher than ours (2324 against 2024).

Max Parkhouse and Rayelynn Posadas found the going tough, but there was a very creditable draw on board two for Peter Gayson and an excellent win for Maaike Keetman on board one against International Master Lawrence Cooper. 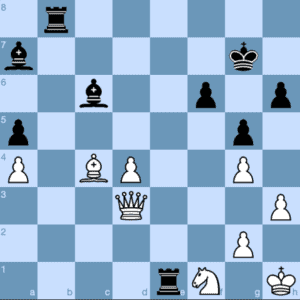 Lawrence has just traded his queen for two rooks. He needs one more move to connect his pieces, but Maaike spots an excellent move to exploit the undefended nature of several black pieces.

Threatening the rook and also 35 Qc7+, forking the king and both bishops. Lawrence is forced to give up some material.

White has a big advantage.

A little later in the game the white queen found another way to force the gain of material. 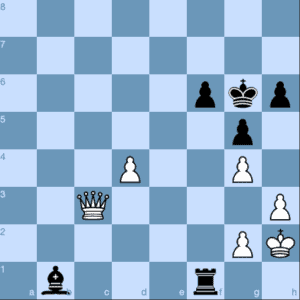 A small move with a big impact. The threats of both 42 Qg8 checkmate and 42 Qxf1 are more than enough to force a resignation. 1-0

Team 3 produced an excellent victory over Guildford Castles, despite being out-rated on every board.

Miles Edwards-Wright and Tom Wills both won fine games and a draw by Solomon Hayes confirmed the match victory. 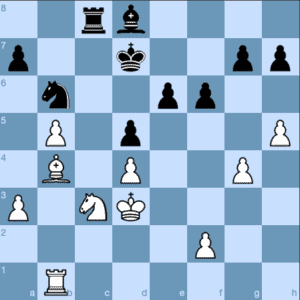 White is applying pressure to the black position but the material is equal and it is not so easy to find a decisive breakthrough.

I like the way in which Miles switches attention from the queenside to the kingside.

Opening up the h-file.

Occupying the open h-file and preparing for infiltration. 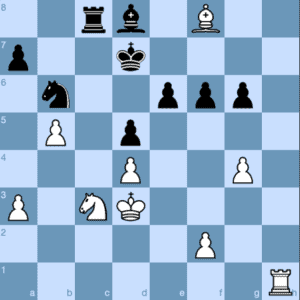 A steady increase in pressure brought the desired result.1-0 (46)

Team 1 is still on top of the Division 1, Group B table with three match victories and a very slender lead over Oxford 1.

One match win, one draw and one defeat is still enough for Team 2 to hold fourth place in the Division 1, Group A table.

Team 3 have won all three of their matches and they share the lead at the top of Division 6, albeit with six other teams who are also on maximum, match points.

We will report on the fortunes of Round Four in two weeks’ time.