Time now for some weekend reading as our ongoing series of interviews continues with a discussion with International Master Richard Palliser. 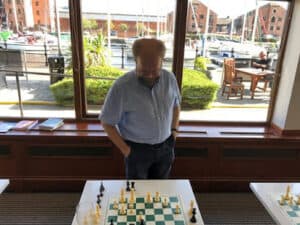 Richard is one of the hardest-working people in the chess world. In addition to being long-term editor of CHESS Magazine, Richard is also a strong International Master. He finished equal third at the 2019 British Chess Championships, losing only to Michael Adams and finishing ahead of nine Grandmasters.

Richard is a perfect gentlemen and also a highly respected author, with numerous titles for both Batsford and Everyman.

We recently welcomed Richard into the Chessable fold with a celebration of the release of The Complete Chess Workout 1.

I have know Richard for many years (ever since he played in my junior events, in fact) and I am delighted that he found the time in his hectic schedule to to be interviewed for this blog.

At some point when I was seven. I was fortunate that my grandfather was quite decent for a casual player and that there was a chess club at Molescroft Primary School, where I started just before my eighth birthday.

I recall reading The Usborne Guide To Playing Chess repeatedly in the school library, which I think was by David Norwood!

I was lucky to get annual subscriptions to CHESS Monthly and British Chess Magazine; one for my birthday and one for Christmas each year. From the age of about nine, I’d play through all the games in both each month on my pocket-set. Yes, we are talking pre-Internet! A little later I learnt plenty from John Nunn’s Best Games, as well as, err, Batsford Chess Openings 2.

I was fortunate to live in the same small town, Beverley, as one of Yorkshire’s strongest players, Stuart Brown, who very kindly gave me six lessons when I was 11, in preparation for trying to get selected for England, and some more over the next few years.

Variable. I’m probably quite a classical player at heart, but am often tempted by wild and wonderful possibilities.

Were any players influential in the development of your style?

I dare say the Kasparov – Short title match of 1993, with so much excellent television coverage, influenced my early development, even if back then I preferred the Exchange Ruy Lopez to 4 Ba4! after being sold Edmar Mednis’s book (From the Opening Into the Endgame, Pergamon Press, 1983) on it by Malcolm Pein at the 1993 British Championship.


What is your most memorable success (so far!)?

Any team success is always special, be it a relative one in the 4NCL or winning the County Championship, Woodhouse Cup (Yorkshire League), Finnish League or even just a local league. Individually I guess 8/13 in the 2001 World Junior wasn’t too shabby or one of my performances at a Torquay British (sole fourth with 8/11 when David Howell won in 2009 or joint third with 6½/9 last year).

At what point did you decide to take chess your profession?

I’m not sure I have yet…

Do you have any Grandmaster norms, and is gaining the title still on your agenda?

Fairly certain I made one in the 4NCL at some stage, but such things have never really motivated me. Besides, playing takes time away from other chess work!

There have been some quality elite chess events online during the lockdown era, but I do fear for all the non-elite Grandmasters, including even some around the 2700 mark, whose opportunities to earn money from playing have nose-dived. As for myself, I’m yet to play anything slower than a 5-minute game online and suspect that will continue until the world is less crazy and over-the-board chess is fully back.

On Board with Chessable

I first became aware of Chessable soon after David Kramaley set up the company and recall John Bartholomew being most enthusiastic about it at one of the London Chess Classics. Seeing my 4NCL side, White Rose, and Chessable unite last year certainly made even more aware of all the excellent material available from David, Dmitri, Geert and their fine team.

The Complete Chess Workout 1 has just been released. How long did it take to convert if from book form to a Chessable course?

Kudos to Danny Overweg who appeared to convert the pdf and pgn files I supplied into a course in seemingly no time at all.

I’m not sure if I’m able to reveal this yet, but between mid-June and earlier this month I must have spent at least 500 hours constructing a repertoire in tandem with an existing Chessable personality… We should be able to say much more soon! I believe the follow-up work to The Complete Chess Workout 1 will also appear as a course at some stage.

What is your role with the Chessable White Rose teams?

I still try to spend three-four hours analysing each game, although doing so becomes ever harder even if you play as little as I do, as well as at least a couple of hours preparing for almost every opponent.

You first met Grandmaster Gawain Jones at a junior chess event. I understand you work with Gawain. What is the nature of the work?

I’m sure you can reveal more about that story, Sean! Safe to say Gawain outplayed me, despite being several years younger, at one of your Cathedral Software events, sponsored by his parents’ company. We started working together before the 2012 British Championship in North Shields and have done a fair bit of preparation together, if not so much of late. 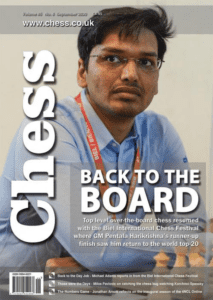 For how long have you been the editor of CHESS Magazine?

Also since 2012, which should help clear things up for those who always ask why I stopped writing books!

What do you think you have brought to the magazine?

Good question! It’s a famous magazine and a privilege to be the Editor, not least with so many excellent regular and semi-regular contributors.

You have written a lot of books, not just for Everyman, but for Batsford too. Do you have a favourite book of your own?

My first two books were with Batsford, writing part of Chess on the Web for Sarah Hurst and Batsford, which happened around the time I finished school, and Play 1 d4! which came out during my third year at Oxford. After that, John Emms and Byron Jacobs tempted me over to the Everyman stable, and I was soon editing and writing for them.

Virtually none, although put me in a team setting, where everyone plays for the team and in tune as much as possible with the overall match scenario, and…

Club always want to hear of ways to improve their game. What advice would you offer to them?

Solve tactics for 10-15 minutes a day whenever you can, study as many games as possible each month in a magazine (yes, even those in the openings you don’t play!), and analyse your games first with your opponent, team-mates or friends, then alone and only then with the silicon beast.

That may depend on who else is around and how far the nearest pub is… I’m usually fine by the next day.

What is your opinion on the English Chess Federation? What do they need to do to improve?

The ECF are becoming ever more modern and forward-thinking – the board has moved a long way from being almost anti-professional chess – but I do hope they have plans to purchase some perspex screens and stage small events for all our professional players, as well as leading junior and female players. The UK may currently be bathed in uncertainty and fear, but plenty of our European neighbours have demonstrated how to safely hold tournaments even as Covid continues to grip the mind of governments.

The deepest combination I ever played was against Jonathan Hawkins, but he was already easily strong enough to see what was coming, so the full finish was never played out. 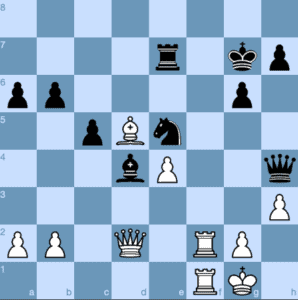 A neat finish, although I must confess that I was a little disappointed when my opponent resigned after some thought. Indeed, I was hoping to be allowed to play: 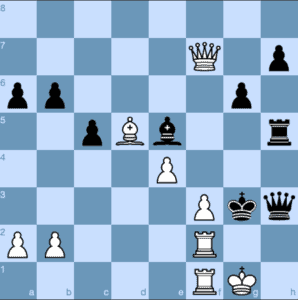 What a final position this would have been!

I guess my win in an old Hull – York match was also quite special. 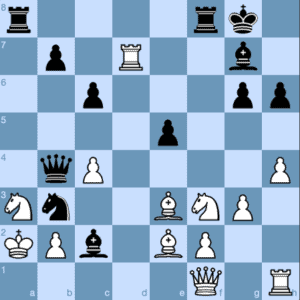 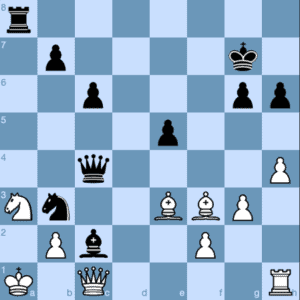 Beliavsky – Nunn. Black only moved backwards once, and that was to collect material! 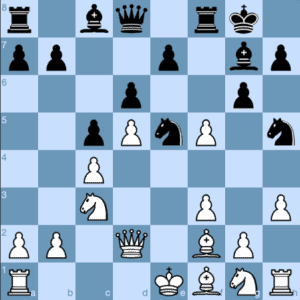 Which aspect of your chess life gives you the most satisfaction (writer, player, trainer, other…)

I’m lucky to work in a field I love. Even when rewriting terrible English I’m fairly happy, although these days getting lost in a wild position with both Lc0 and Stockfish running in the background can be quite special.