Stalemate is the todays them and we will show we can use startling chess tactics to achieve the aim.

Stalemate occurs if the player to move is not in check but does not have any legal moves. The result is a draw.

Inexperienced players with a surfeit of firepower will often stalemate their opponents by accident but today’s positions require accurate and surprising moves from the side trying to force a draw.

It will soon be time to test your own chess tactics to see if you can fathom how to force a stalemate from today’s positions, but first we have an easy starter to set the scene.

All is Not Quite Lost! 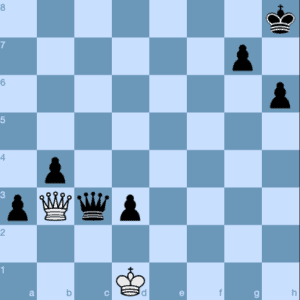 James Congdon – Eugene Delmar
New York, 1880
White to play
White, no fewer than five pawns down, looks certain to lose. However, after the star move 44 Qg8+! Black is forced to accept the queen sacrifice with 44 …Kxg8. Now the game ends not with White’s defeat, but with a draw due to stalemate. White is not in check but has no legal moves. An amazing escape!

Now it is your turn.

Can you use your top chess tactics to force a stalemate in each of the positions below? 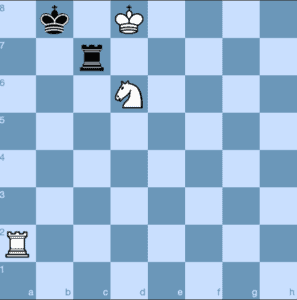 How did Black force an instant draw? 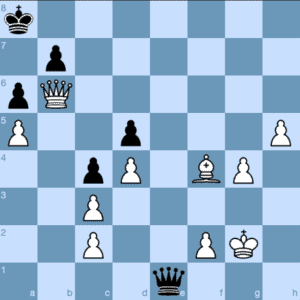 Anatolij Bannik – Borislav Ivkov
Rijeka 1963
Black to play
Why hasn’t Black resigned? Simply because he is playing for once last chance to save the game with a very nice chess tactic. How can he force stalemate from this position? 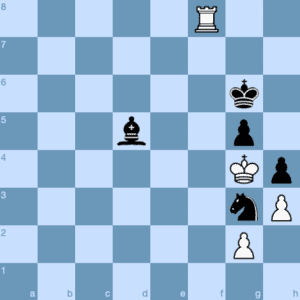 This is an unusual position. The minor pieces (bishop and knight) have outplayed the major piece (the rook) and the loss of the pawn at g2 seems inevitable. Yet Bisguier managed to draw the game by springing a startling stalemate trap. Can you see how?

62 Rf6+! Now 62 …Kxf6 would draw the game by stalemate. Black declined the offer, but after 62 …Kg7 there followed 63 Rg6+! Kxg6 stalemate. If Black remained ambitious and still refused to capture the rook then 64 Rxg5 would follow and White would suddenly have winning chances. 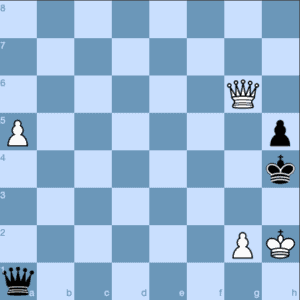 White is threatening 70 Qg3 and 70 g2-g3, checkmating the Black king in both cases. How did Black force a draw with a startling move, leading to stalemate? 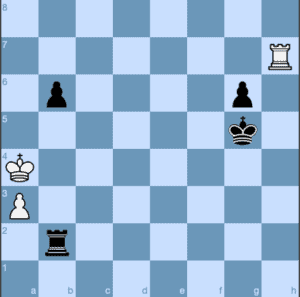 White’s king is cut off from the action and Black’s passed b-pawn looks set to stroll down the board on its way to promotion. How did White save the game?

White played 66 Rh5+! If the rook is captured, by either the king or the pawn, it is stalemate. If the king tries to run away the rook repeatedly offers itself until it is eventually captured. For example, 66 …Kf6 67 Rf5+!

More instalments from our ongoing series on tactics can be found here:

Meanwhile, if you would to investigate more deadly chess tactics then it is time to head for our Chessable tactics courses.

Incidentally, if you would like to check your answers to the above questions, simply highlight the white space beneath each diagram!