The sponsorship deal between ourselves and the famous Yorkshire side was announced on this blog in January 2020.

Of course the 4NCL is now being played online and it is very unclear when we will see a return to over-the-board action. Playing serious games online is not at all easy but we must all try to adapt to the new circumstances.

Today we have an update on the progress of the respective teams.

Team 1 earned a narrow victory over Blackthorne Russia in the first round, despite the defeat of Gawain Jones by Danny Gormally. A draw by James Adair and wins from John Emms and Christof Sielecki guaranteed the victory.

In the second round they beat Wessex Some Stars A 3-1, thanks to wins by James Adair, Jose Camacho Collados and Tim Wall, with Paul Townsend suffering the team’s only defeat.

Tim had to keep a cool head to see off a late tactical flurry. 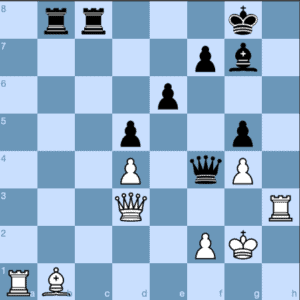 Black’s minority attack has been a success, removing all of the queenside pawns. Now there are threats against both d4 and g4 and Black is winning.

However, strong players always find ways to try and turn the trend of a game and White’s next move represents one last try. 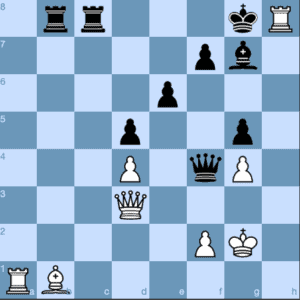 38 …Kxh8 39 Qh7 checkmate cannot be tolerated, so the black king has to go on a journey. 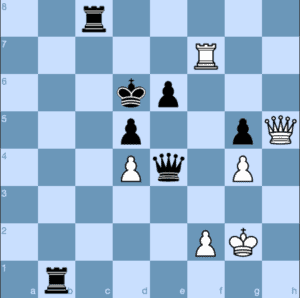 The smoke has cleared. White has saved the two pawns which had appeared doomed in the first diagram, but it has come at a very heavy cost. A rook down and with checkmate to his own king not too far off, he resigned here; 0-1.

Chessable White Rose 1 are the defending champions of Division 1 and will be hoping to retain their title.

Easier said than done, of course; this is a very tough league and there are still plenty of matches ahead.

Tim Wall lost a very close game on board one but the match victory was secured by the wins from Peter Gayson and Maaike Keetman and the draw by Alexandra Busuioc.

Maaike Keetman and Peter Gayson were on excellent form again in round two. They won their respective games against a powerful Alba side. Conrad Ho and Tom Wills both suffered defeats, but we were heavily out graded in the match and a 2-2 result is extremely meritorious. 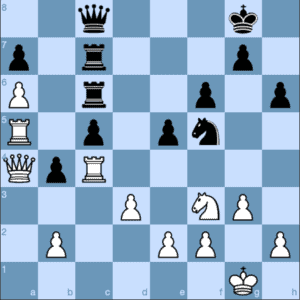 There is a lot happening on the c-file. White’s next move seeks to intensify the pressure on Black’s c-pawn, but there is an important detail in the air.

Well spotted! It is often said that a knight moving backwards can slip under the radar. Suddenly, the rook on c4 is in big trouble. 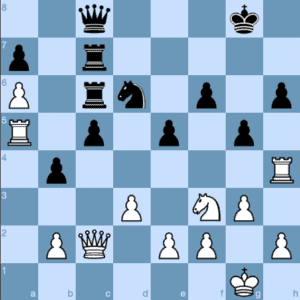 38 Rxh6 Nf7! 39 Rh5 Qg4 is a sample line to show how short of squares the rook has suddenly found itself to be.

Maaike was now the exchange up but the win is not trivial. Displaying excellent technique, Maaike eventually gave back the exchange to convert the position into a winning rook and pawn ending (0-1, 64). 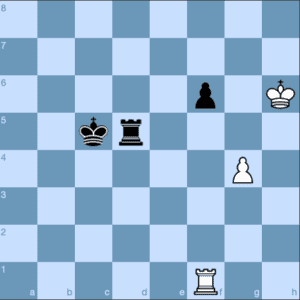 Rayleynn has just played 103 Kh5-h6 and Black should now play 103 …Rd4, after which the game should clearly end in a draw. White would have to keep defending the g-pawn with one piece and Black’s own pawn would survive too.

After 105 …Kd6 there is still one more good move to find. 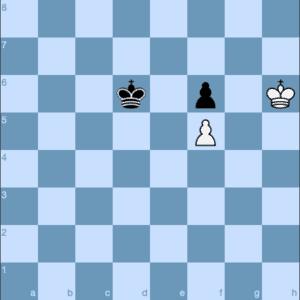 White utilises the art of triangulation to delay the king’s arrival at g6 by a single move. The point is that 106 Kg6? loses to 106 …Ke5! and the white pawn falls.

Both players must have been exhausted at the end of that and they deserve great credit for the fighting spirit they showed throughout the game.

It has been a very good start for all three of our teams.

Team 2 is in fourth place in the Division 1, Group A table (the three teams above them have won both matches).

Team 3 shares the top of the table in Division 6 (in fact, thanks to the Chessable sponsorship, we top the table – alphabetically!).