What will be the ‘new normal’ for chess clubs?

We are enjoying the online elite tournaments, led (in more ways than one) by the World Champion, Magnus Carlsen. 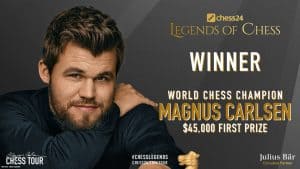 It would have been easy for Carlsen to rest on his laurels and let others put their reputations on the line (and online). He has little to prove but clearly just wants to play chess.

In fact another big event will be happening this weekend, about which more will follow in tomorrow’s post.

Given the dreadful world situation and the modern reliance on buzzwords and catch-all phrases, there is a serious concern that we are experiencing the ‘new normal.’

What will happen to over-the-board chess?

Will we ever return to the cosy world of turning up on our weekly club night to experience the full cycle of emotions, from the euphoria of victory to the despair of a defeat?

All of our local rivalries are currently on hold.

Online sites are becoming increasingly popular with club players. In former times, this was mainly for fun Blitz games, but now major events – such as the 4NCL – have moved online for the foreseeable future.

There are obvious advantages in terms of logistics. No need for hotel bills, no need for train tickets.

The Familiar Face of Cheating

There are disadvantages too, such as the lack of social contact. The scope for cheating is greatly expanding too.

The elite tournaments we all enjoy watching don’t have the problem. The players are on camera all of the time and it would be a very sad day indeed if an elite Grandmaster of chess would ever contemplate gaining an unfair advantage by unscrupulous means.

At club level, there is much more of a temptation to stray from the correct path.

It is not at all practical for all club players to place themselves under such obvious scrutiny. Webcams for local league matches? Very unlikely.

Cheating at online chess is not even new. It is just hitting the headlines because of the increase in the number of people being victims of the cheats.

Even 20 years ago, it was generally accepted that playing anything more than a three-minute game would increase the very strong possibility of encountering a cheat. Armed with an engine, a cheat could improve their rating very quickly and ‘impress their friends.’

How to stop it? Unfortunately, you can’t.

There are new initiatives, experimenting with various methods to resume playing with real chess pieces and boards.

The 99th Irish Chess Championship is going ahead, with masks, screens and social distancing all present and correct.

There is a significant discussion in progress on the English Chess Forum, which was started by the chess player, trainer and journalist Tim Wall. Various options are under discussion, including Hybrid Chess. This involves the use of laptops on which to play local matches, while retaining the social aspect of a normal club night.

I am sure many players will resist returning to their clubs is anything if anything out of the ordinary is required.

Others will stay away out of a fear of the situation.

What will happen next?

Will chess players be tempted back to their clubs?

Will playing online become the ‘new normal’ for chess clubs?