There was plenty of drama at the semi-finals of the chess24 Legends of Chess tournament over the course of the weekend.

Our first blog prediction was for Magnus Carlsen and Ian Nepomniachtchi to emerge triumphant against Peter Svidler and Anish Giri respectively.

The second prediction claimed ‘there is certainly more excitement in store.’

Both predictions came true – although one of the two matches kept everyone guessing until the final moments.

Carlsen was in dominant form in his two mini-matches against Svidler, needing just three games on each of the days to secure victory. The tally over the two matches was four wins, two draws and no losses for the World Champion. Terrifying form!

There was a moment in the first game when Carlsen pulled out an extraordinary move.

Svidler has sacrificed a pawn to obtain the bishop pair and an impressive pawn roller on the kingside. With just 15 minutes on each clock the initiative is going to be worth a lot.

I don’t know if anyone else would have played Carlsen’s next move. 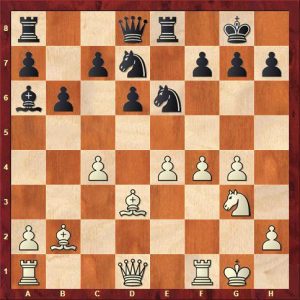 Chess fans will be discussing this move for some time to come. The game can be replayed here. The psychological impact of such a move cannot be underestimated. 15 …g5!? put Carlsen firmly on the road to victory not only in this game (0-1, 27) but also for the semi-final as a whole.

The other fixture looked to be heading along the same smooth path, with Nepomniachtchi dominating Giri on the first day. The score was 2.5-0.5 – exactly as it had been between the same two players in their preliminary match.

The second day also started very well for Nepomniachtchi, with a draw in the first game and a win in the second.

Who would envy Giri’s situation? So often lazily labelled as a draw-merchant, he had to dig deep – very deep – in search of a victory.

Somehow, he managed to do exactly that – despite having the black pieces and facing 3 Bb5+ against his Sicilian Defence. He went into the endgame with an extra pawn and with a bishop against a knight.

The fourth Rapidplay game of the match ended in a draw which meant they had to play two games at a much faster limit.

Nepomniachtchi won the first of the two games – but Giri rose to the occasion once again. There were some peculiar moves early on and Giri took two extra pawns into the endgame and duly equalised the match score once more.

Giri then went on to win the Armageddon decider – with Black. This meant the match would rumble on to a third day of action.

The first of the two Blitz games finished the same.

It was only after the second of the two Blitz games that Nepomniachtchi finally managed to end the match in his favour.

What a semi-final it had proved to be! 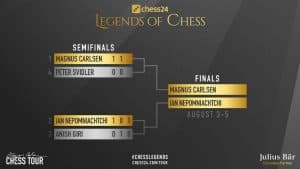 The final will be very interesting. Despite the fluctuating fortunes of the semi-final, Nepomniachtchi has had an excellent tournament.

Will he be able to upset the World Champion in the final? There was drama at the semi-finals; how exciting will the final be?

Follow the action and find out over at chess24.