Today we head into the semi-finals of the chess24 Legends of Chess tournament.

The preliminary phase brought a feast of chess, with the veterans giving their younger opponents plenty of food for thought.

The mini-match format brought back very good memories of the old Candidates matches. Oh, how we miss those battles!

The final round of the preliminary phase clarified the qualifiers for today’s semi-finals. 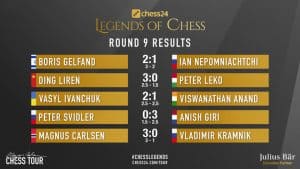 Tune in today to follow the chess24 Legends of Chess Semi-finals over at chess24. 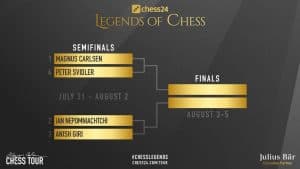 World Champion Magnus Carlsen is on great form and has already been very successful in all of the online events.

Will Peter Svidler be able to change the trend?

Their preliminary match was extremely close. The first three games ended as draws and Carlsen only emerged victorious after the fourth game.

The closeness of the games will give Svidler some hope of causing an upset, but it is still difficult to imagine Carlsen not reaching the final.

Ian Nepomniachtchi and Anish Giri have both embraced the brave new world of online events too. Which player will make it to the final?

Nepomniachtchi beat Giri 2.5-0.5 in their preliminary match, so Giri will have to find some serious improvements if he is to gain revenge.

Blog Prediction: The final will be between Carlsen and Nepomniachtchi.

We will be back on Monday to see if the prediction is correct!

Meanwhile, all of the games played so far can be found here. There is much to enjoy. Highlights include Kramnik’s attempts to attack the Sicilian in Open style, to Ivanchuk’s typically unpredicatble style and moves. They kept the viewers amused and entertained in equal measure.

It would be good to see veterans back in action as soon as possible.

Here is a second blog prediction of the day. There is certainly more excitement in store at the chess24 Legends of Chess semi-finals!