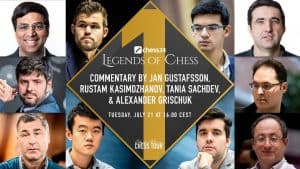 The chess24 Legends of Chess tournament is here!

Before the current emergency, elite events were always played over-the-board, even though chess fans around the world had been steadily migrating away from their local chess clubs and into the easily accessible world of the Internet.

Circumstances forced the top players online. We have already seen a number of very fine events since the infamous days of the 2020 lockdown began. The recent Chessable Masters is a case in point.

The chess24 Legends of Chess brings forth an extremely strong set of players.

In addition to the reigning World Champion, Magnus Carlsen, we also have:

The preliminary round sees all 10 players contesting mini-matches of four games against each other, with Armageddon games used to split 2-2 draws.

The top four players will contest the concluding phase of the tournament – the Knockout!

The first round brought some very interesting results, with the victory of veteran Boris Gelfand being the highlight. 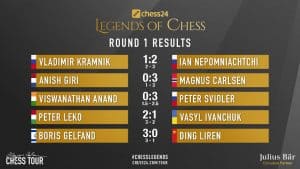 World Champion Magnus Carlsen is leading by example in this brave new world of elite chess events. He had some uncertain moments at the start, being openly unhappy with his play in the Steinitz Memorial, for example.

Nevertheless, he has not hidden away and has repeatedly put his reputation on the line. Any elite event without the presence of the reigning champion of the world will suffer by comparison. 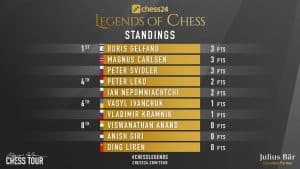 Any gap in the standings after just one round can definitely be repaired over the course of the preliminary round.

Can the World Champion keep this extraordinary array of former champions and Candidates past and present at bay?

Follow all of the action live on chess24. You will find commentaries, analysis and enough great chess to satisfy even the most discerning of chess fans.

The chess24 Legends of Chess will definitely keep everyone entertained for some time to come.