Today we continue to celebrate the Chessable release of Garry Kasparov’s My Great Predecessors Part Five. This time we take a look at the 12th World Champion, Anatoly Karpov.

Karpov was, of course, Kasparov’s immediate predecessor and their chess rivalry was one of the greatest of all.

Playing five title matches against the same person is extraordinary enough. Factor in being tournament rivals as well as teammates and it is certainly a very good way to get to know someone. Although, despite the words of the song, ‘to know, know, know him’ is not necessarily ‘to love, love, love him.’

Karpov features in several other Garry Kasparov volumes, of course; the ones covering their matches. What makes My Great Predecessors Part Five so interesting is that Kasparov doesn’t need to be either overtly or covertly competitive and is able instead to give an honest appraisal of Karpov’s chess life and games.

Praise is found in abundance, with the 13th World Champion freely eulogising the play of the 12th:

‘His deep, infiltrating style, subtle positional feeling, and extraordinary persistence, practicality and flexibility rapidly raised him to the very summit of chess.’

Anatoly Karpov’s Rise to the Top

Karpov’s rise to the top came just at the right time for the USSR. In 1970 they had come close to losing to the Rest of the World in first ‘Match of the Century.’ This was despite more than 20 years of stockpiling world champions. Their victory by a single point was too close for comfort and the strong possibility of Bobby Fischer taking ‘their’ title was very worrying indeed.

At the end of that year, Anatoly Karpov shared fifth place in the USSR Championship (Viktor Korchnoi was the champion) – ‘but more had been expected from him’ according to Kasparov. Nevertheless, it was already clear a major new force was emerging.

Amusingly, even before the 1973 Interzonal tournament in which Karpov shared first place with Korchnoi to qualify for the Candidates matches, Karpov and a group of friends played a game of ‘guess the Candidates finalists.’ Karpov ‘didn’t put myself down, because I genuinely didn’t think that is was my cycle.’ Instead he wrote down Spassky and Petrosian. ‘I was sure that they were the strongest of the Candidates.’

It was only when Karpov and Korchnoi both reached the final that the envelopes were opened. Naturally, Karpov had been wrong with his prediction. In fact he had personally beaten Spassky on his way to the final. ‘In only one did Korchnoi-Karpov appear, and it was written in Korchnoi’s familiar hand…’

Karpov became champion in 1975 when Bobby Fischer opted out of the title match (long story!). Karpov dominated world chess for a decade. During that time he was virtually unbeatable and it was always a big surprise if he failed to take first place in a tournament.

Anatoly Karpov’s repertoire as World Champion was extremely difficult to crack. As White he played 1 e4, with only occasional deviations. He played the Spanish Game against 1 …e5, Open Sicilians, the Tarrasch (3 Nd2) against the French, and classically against the Caro-Kann (3 Nc3/3 Nd2) and Pirc (3 Nc3 and 4 Nf3).

As Black he was rock-solid: Queen’s Gambit Declined and the Nimzo-Indian against 1 d4 and 1 …e5 against 1 e4, with a choice of the Petroff Defence and defending the Spanish Game depending on mood.

Win with White; draw with Black. He would make the Petroff Defence look so safe as Black but frequently win against it with White.

Anatoly Karpov could be described as an opportunist. There have been many times when his extraordinary resourcefulness has proved to be the decisive factor after exceptionally tough battles.

Kasparov highlights notable examples against Korchnoi, with their incredible 1978 match proving to be fertile ground to demonstrate the point.

In this game, Korchnoi’s advantage was obvious for some time. So was his habitual time-trouble – and Karpov knew exactly how to handle such a situation. A little bit of risk and an opportunist’s eye… 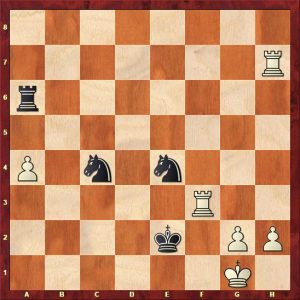 37 …Ncd2?! ‘Again risking a practical chance in the opponent’s time-trouble, instead of the simple 37 …Rxa4 with equality.’ 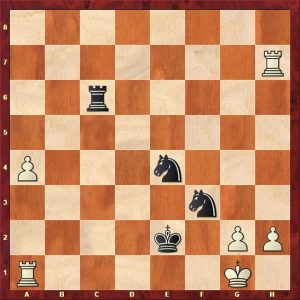 A tragic end for Korchnoi. ‘In time-trouble it is easy to miss such a stunning blow. White resigned: 40 gxf3 Rg6+ 41 Kh1 Nf2 mate, or 40 Kh1 Nf2 mate. Thunderous applause broke out in the hall: some Soviet tourists had arrived for that week.’

Karpov’s involvement in the World Championship brought some of the most fiercely-contested matches ever seen. There were three epic matches with Korchnoi and five with Kasparov. Then, when the chess world split in 1993, Karpov reclaimed the FIDE version of the title with a victory over Jan Timman. Subsequent victories over Gata Kamsky and Viswanathan Anand kept him as FIDE champion until he declined to defend his title in 1999. This, remarkably, brought a kind of symmetry to his years as champion of the world.

Writing after their rivalry ended, Kasparov was free with his praise.

‘What for me is certain and is confirmed by the games given in this volume, is that Anatoly Karpov is one of the greatest epoch-creating players of the late 20th century, and his contribution to our knowledge of the subtleties of the ancient game is truly invaluable.’

Head here for the Chessable version of Garry Kasparov’s My Great Predecessors Volume 5 to find out more about the extremely successful chess career of the great Anatoly Karpov.