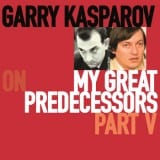 Garry Kasparov’s series of books on My Great Predecessors is rightly hailed as a classic.

Today we are taking a look at volume five, to celebrate the release of the brand new Chessable version.

The book was first published by Everyman Chess in 2006. It is a particularly good volume as it examines the chess lives and games of Viktor Korchnoi and Anatoly Karpov, both of whom were influential – one way or another – in Kasparov’s own chess career.

We are examining the Korchnoi aspect of the book today and in a subsequent post we will look at the Karpov segment.

Korchnoi was one of Candidates Kasparov had to beat on his way to challenge Karpov for the title. Kasparov failed to show up (chess politics; we may return to the subject another time) and Korchnoi originally won the match by default. Korchnoi then agreed to give the match a second chance. It proved to be a pivotal moment in chess history.

The score was 7-4 to Kasparov, but it really was – to use the old cliché – a match of two halves. Korchnoi controlled the opening games before slipping up badly in the sixth game – despite it being a rook and pawn ending, in which was undoubtedly a great expert.

The first game was a triumph for the veteran (he was 32 years older than Kasparov). The future champion of the world had demolished numerous opponents with his special line against the Queen’s Indian Defence (1 d4 Nf6 2 c4 e6 3 Nf3 b6 4 Nc3 Bb7 5 a3) but Korchnoi played a fabulous game to get off to the best possible start – a win with Black.

Kasparov devotes extensive notes to the game. The key moment came on move 33.

Kasparov has just played 33 Rb4-d4? ‘In serious time-trouble, White overlooks the loss of a pawn.’ What did Korchnoi do to gain a significant advantage? 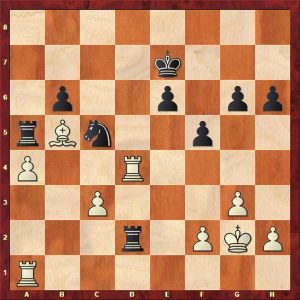 Although the section on Karpov is the larger of the two, Korchnoi’s is not far behind.

‘This chapter is fully comparable in size with some of the chapters devoted to world champions. Here it is a question not only of the unique length of Korchnoi’s chess career, but also of his rare inventiveness, and his tireless attempts to find something new in seemingly exhaustively studied positions.’

Korchnoi’s extraordinary chess career brought him agonisingly close to the ultimate title of World Champion, a title he was ultimately to fall short of – but only just.

There are 49 prime cuts from Korchnoi’s games, starting with a game against Semion Furman (USSR Championship, Kiev, 1954) and ending with a 2003 victory over Etienne Bacrot (Reykjavik, 2003). Incidentally, Furman went on to work with Korchnoi before moving on to become Karpov’s trainer. The original K v K rivalry was not confined to mere moves on the chess board.

‘It seems to me that, apart from enormous talent, it is also a question of Korchnoi’s selfless love for chess and his supreme professionalism. All his life he has been working on the improvement of his style.’

Indeed, initially Korchnoi was famous for being an acceptor of all sacrifices, confident in his ability to survive a spell being under strong pressure and of emerging from the middlegame with an endgame advantage.

Drama on the Board

This position is from the extraordinary match against Boris Spassky to determine who would be the challenger for Karpov’s title in 1978. It is hard to believe Spassky would have caused Karpov much trouble at all but Korchnoi, the Soviet dissident, was a real danger.

Positions full of major pieces are difficult to control. Adding passed-pawns on the respective seventh ranks to the mix leaves everything balanced on a knife edge. 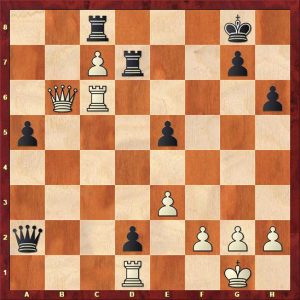 ‘‘A very important move! Black can no longer speculate on the weakness of White’s back rank.’’ (Korchnoi)

Korchnoi: An Active and Dangerous Player

Time and again Korchnoi outplayed younger opponents ‘by creating unclear positions, full of life’ and, despite the disparity in ages, Korchnoi seemed to possess uncanny reserves of energy.

Korchnoi was still an active and dangerous player at the time of the book’s publication. Kasparov mentions a particularly noteworthy result when ‘Korchnoi greeted the New Year 2005 at a tournament in Drammen in Norway, where he defeated the 14-year-old Magnus Carlsen – at that moment the youngest Grandmaster in history. The difference in age between them was 59 years!’

Headlines to the End

Korchnoi was still creating headlines for several more years after the publication of the book. He famously beat Fabiano Caruana – as Black – in a spectacular game at the 2011 Gibraltar tournament. Caruana was Carlsen’s title challenger just seven years later. In fairness to him, he had a 3-0 score against Korchnoi before the Gibraltar game.

It is very clear that Kasparov had great respect for Viktor Korchnoi and it is fascinating to read his thoughts on one of chess history’s absolute giants.

Head here for the Chessable version of Garry Kasparov’s My Great Predecessors Part 5 to discover for yourself more about the remarkable Viktor Korchnoi.