It is now time to examine the ending we left you with in the previous blog post. Black’s best move is undoubtedly to capture the rook in order to head for the king and pawn ending. 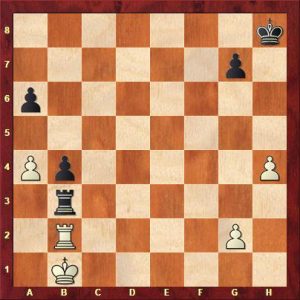 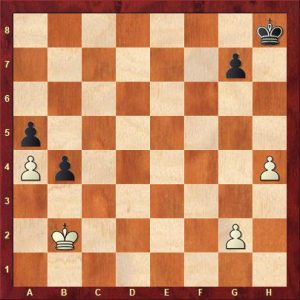 Black immediately ensures he has a protected passed pawn. If Black delays for a single move then White will play 45 a5! and round up the stray b-pawn with his king. Then the king will walk across to capture the a-pawn and the white a-pawn will march on to promotion, winning the game for the first player.

King and pawn endings are notoriously difficult as there is a very small margin of error. Anything other than 45 g4! makes it easy for Black. For example, 45 Kb3 g5! when 46 hxg5 would allow the black king to capture the two g-pawns and 46 h5 would fail to 46 …g4!, preventing 47 g4. Once again the black king would easily capture the g-pawn.

The recurring theme of this ending is the situation of the white king. It is tied to the white queenside quadrant as it cannot allow the passed b-pawn to advance safely. Therefore Black’s king can take a much more active stance than its counterpart.

Black needs to be careful too. 45 …g5? no longer has the desired effect of weakening the white kingside pawns because 46 h5! gives White a protected passed pawn too. The game would then be a draw as neither king would be able to start from their defensive duties.

Paul Keres, in his classic book Practical Chess Endings (most recent edition: Batsford, 2018) analyses this ending and gives the simplest winning line as: 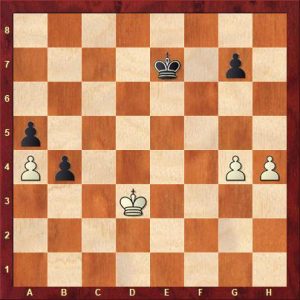 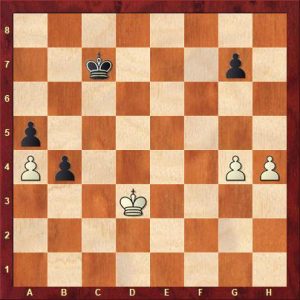 This is a winning position for Black as he can force the opposition. This essentially means the white king will soon have to give way and allow the black king to wander into his positon (we will return to the theme of the opposition a future post). A simple sample line runs 50 Kc4 Kc6 51 Kd4 Kd6 52 Ke4 Kc5! and the black king gains serious ground and threatens to help the b-pawn to promote.

Keres gives this as side line in his analysis of the tricky king and pawn ending, saying ‘…but we select a longer way so that we can indicate some additional points about the position.’

He examines the lines leading from 47 …Ke6 48 Ke4 instead, ‘as it best illustrates the various possibilities open to both sides’, calling the whole episode ‘an unusually interesting and instructive example.’ 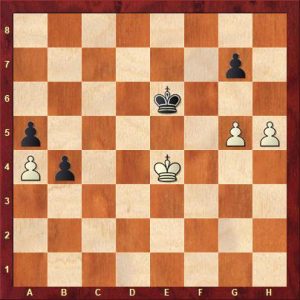 ‘As can easily be seen, the opposition plays the main part here. For example, with the white king on d4 and the black king on d6, if White has to move, then Black can immediately penetrate via c5 or e5.’

André Chéron, in Lehr-und Handbuch der Endspiele: Zweiter Band (Siegfried Engelhardt Verlag, 1970 edition) devotes four pages of analysis to the position after 44 …a5! and shows many twists and turns.

This is Chéron’s main line: 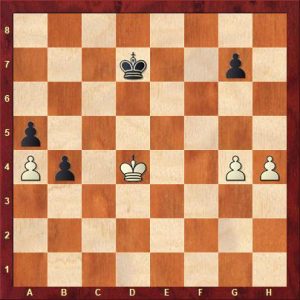 White cannot gain ground as Black did in the previous example, as 50 Kd5? merely allows 50 …b3! by Black, with pawn promotion following very soon. This common theme is definitely with committing to memory.

Nothing else works for White. His king simply cannot get the better of Black’s. For instance, 51 Kd4 Kd6! And 51 Kc4 Kc6! both give Black the opposition with inevitable penetration of the white position.

The problem now is that the Black king is able to target White’s kingside pawns, as they no longer present a united front, protecting White’s fifth rank. 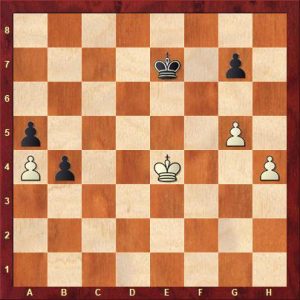 White has the same problem as before. His king cannot take the opposition with 53 Ke5 because the black b-pawn will just run forward to promotion and the white king will not be able to catch it before it becomes a queen. 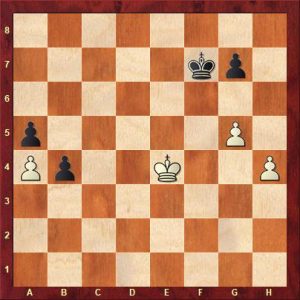 The final use of the opposition. The white king will be forced to leave the pawns to their fate.

56 h6 gxh6 57 gxh6 Kf6 and once Black deals with the h-pawn his king will simply walk over to the queenside and help the b-pawn promote.

Chéron adds no fewer than 15 sub variations to demonstrate why certain deviations are weaker than his main line.

Try playing out the position from the second diagram (after 44 …a5!) with a training partner to discover more secrets of the position.

Remarkably, in the actual game, the players adjourned after 43 Rb2 and Bergs resigned without resuming (0-1). The analysis of both players must have been very deep to work out everything was hopeless for White.

If you would like to investigate more endgames, head for our Chessable endgame courses.